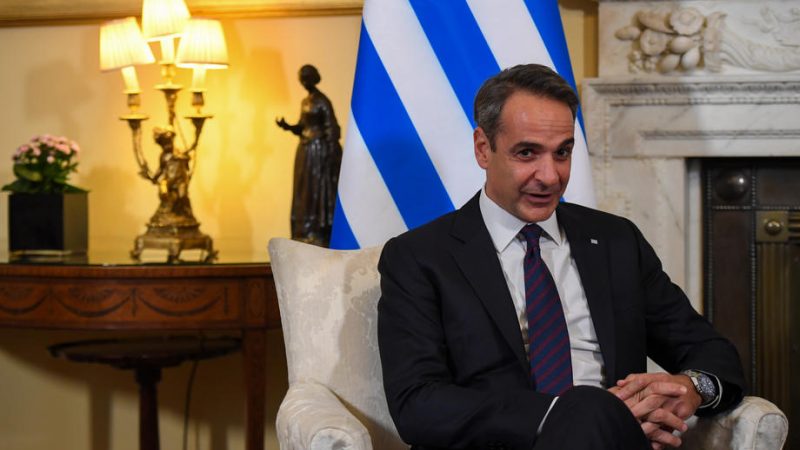 Mitsotakis warned that “If you don’t send a clear message that you are protecting your borders, more people will try to enter Greece illegally.” [EPA-EFE/ CHRIS J. RATCLIFFE]

Prime Minister Kyriakos Mitsotakis said in an interview with ITV’s Good Morning Britain program that “in the last three years we have accepted more than 50,000 asylum applications, therefore no one has the right to accuse Greece of not respecting human rights”.
At the same time, however, he said, “I have an obligation to protect our borders”. He called on Turkey to honour its part of the 2016 EU-Turkey Joint Declaration.
“We call on Turkey to honour its part of the agreement with the EU; it can do more to stop illegal migration.” Mitsotakis warned that “If you don’t send a clear message that you are protecting your borders, more people will try to enter Greece illegally.”
We cannot establish the Schengen area, which is a zone of free movement of citizens, if we do not protect the external borders of the Union. That is what we are trying to do. And I would say we are doing it effectively, given that migration and refugee flows have decreased significantly over the last two years.
Asked whether Greece is turning back boats and dinghies with refugees, Mitsotakis indirectly admitted the fact: “We don’t allow boats coming from Turkey to enter our territorial waters. We always try – very effectively, I would say — to save the lives of people in danger. But we call on the Turkish Coast Guard to do its job, respecting the agreement signed between the European Union and Turkey”.
After the incident with Dutch Journalist Ingeborg Beugel who called Mitsotakis a liar for not admitting pushbacks, it was revealed that a group of independent investigative Journalists and advocates for the human rights of refugees has been under the NIS’s spotlight. Additionally, a “war” was declared by many against a lifestyle TV show, whose presenter invited a human rights activist to talk about saving lives in the Aegean.
(Mattheios Tsimitakis | EURACTIV Greece)