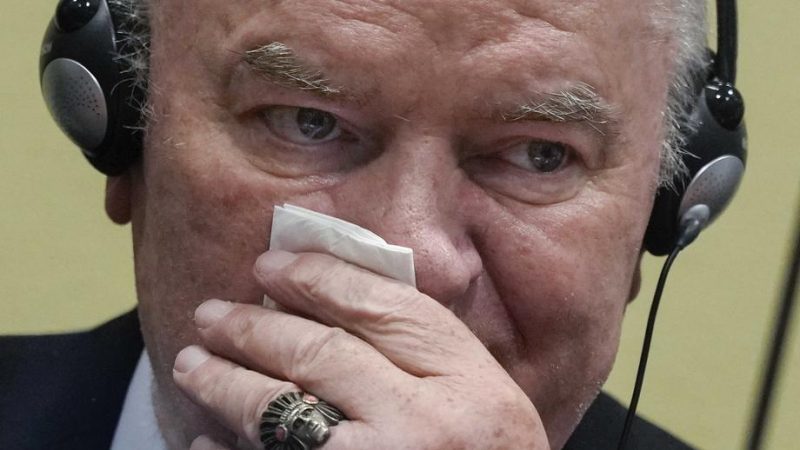 “He told me to tell everyone that NATO had tried and condemned him for defending his people and preventing NATO plans to expel Serbs from their centuries-old homelands”, Darko Mladić has said. [EPA-EFE/PETER DEJONG]

Convicted war criminal and former general of the Republika Srpska (RS) Army, Ratko Mladić, spoke to his son Darko Mladić after his life imprisonment sentence for genocide in Srebrenica and other crimes in Bosnia and Herzegovina was confirmed on Tuesday, telling him to protect the Republika Srpska (Serb entity) and that his own fate is not important.

“He told me to tell everyone that NATO had tried and condemned him for defending his people and preventing NATO plans to expel Serbs from their centuries-old homelands”, Darko Mladić has said.

“Ratko Mladić did not deserve the sentence he was sentenced to because, both as a man and as a soldier, he is highly moral and just,” Ratko’s wife Bosiljka Mladić said publicly.

Representatives of the families of the Srebrenica and other victims of Mladić’s terror welcomed the final verdict.

“The criminal enterprise was condemned, it received its epilogue and I hope that it will never be re-established as an idea of nationalist projects in this area’,’ BiH’s Grand Mufti and head of the Islamic Community (IZ) Hussein Kavazović said Wednesday.

BiH’s future High Representative, the German lawmaker Christian Schmidt, said that “war criminals are not distinguished by heroism. My country had to learn, understand and overcome this in a difficult way”. (Željko Trkanjec | EURACTIV.hr)