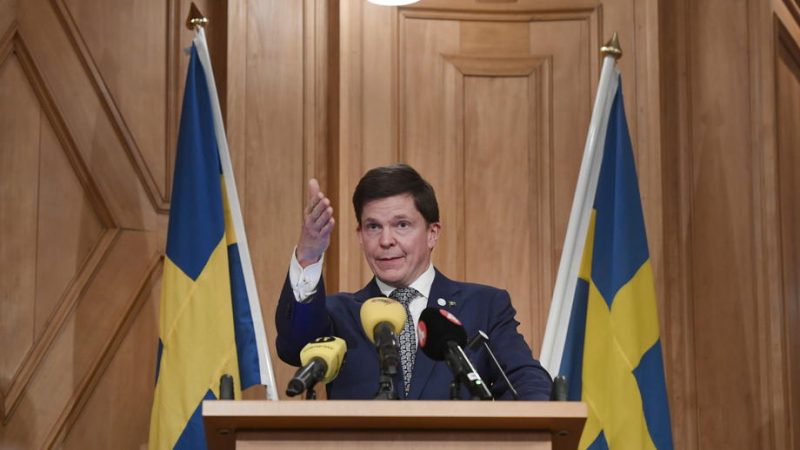 Andreas Norlen, the Speaker of the Swedish parliament, speaks during a press conference after his meetings with the leaders of the parliamentary parties at the Parliament House in Stockholm, Sweden, 29 June 2021. [EPA-EFE/STINA STJEMKVIST]

Sweden’s parliamentary speaker, Andreas Norlén has given Ulf Kristersson, the chair of the conservative-liberal Moderate Party, the biggest opposition party in the current parliament,  a mandate to try and form a new government.

On Monday, Prime Minister Stefan Löfven resigned after his minority government of the Social Democrats and Greens had lost a no-confidence vote in the parliament. Instead of calling for snap elections, Löfven asked the parliament speaker to start negotiations for a new cabinet. In Sweden, the speaker has four attempts at forming a new government but if the parliament rejects them all, there will be elections.

The current target is to form a majority government, requiring 175 votes in the parliament of 349 seats. On Wednesday, it appeared that Kristersson could count on the backing of Liberals, the Christian Democrats and the Sweden Democrats, a combination which would give him 174 votes, falling a vote short.

Kristersson will also have to rely on the support of the Social Democrats, Greens, the Left Party and the Centre Party if he is to be successful in his attempt to form a majority government by Friday’s deadline. (Pekka Vänttinen | EURACTIV.com)