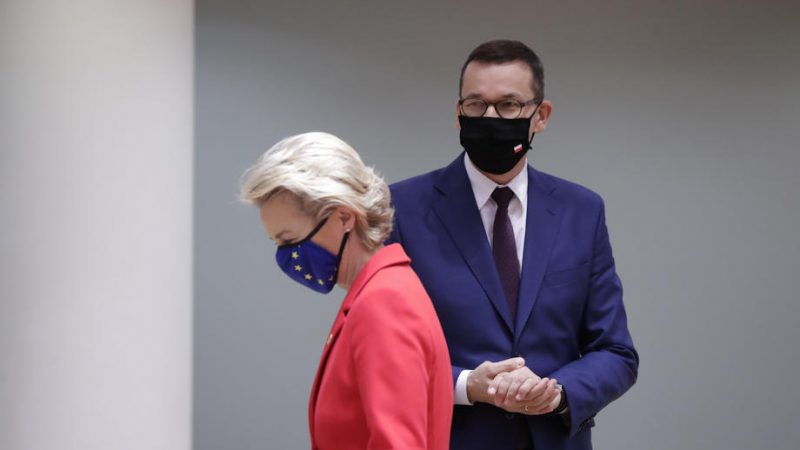 There are signals from within the government of Mateusz Morawiecki, that all retaliatory options against the Commission’s inaction are on the table. [EPA-EFE/ OLIVIER HOSLET]

As the stalemate between the Polish government and the European Commission continues over the approval of the Polish recovery plans, there are signals from within the government of Mateusz Morawiecki that all retaliatory options against the Commission’s inaction are on the table.

“The EU-sponsored recovery plan is a central element in the thinking of the Law and Justice political strategy,” Professor Tomasz Słomka from the Warsaw University told EURACTIV.

The strategy is a series of economic reforms called “the Polish Deal”. “Postponement of the recovery plan is not only problematic for the government, but it may also derail the political strategy”, said Słomka.

“The patience is thin in the Polish government that the Commission will soon accept the national recovery plan”, wrote a daily DGP. The newspaper reported a senior official Waldemar Buda (PiS), “secretly negotiating” the agreement’s details with the Commission. According to the DGP, the negotiations were “about the rule of law conditionality milestones”.

The DGP wrote that the government is considering suing the Commission, according to an unnamed governmental source. “But then we risk the Commission saying ‘yes, let’s wait for the ruling’, and the recovery plan is even more delayed,” the source added.

“We already have a compiled and structured catalogue of issues that we can block. An example can be tax matters dealt with by Ecofin,” the official also said.

“This would be breaking the principle of sincere cooperation”, professor Słomka told EURACTIV.

The Polish national recovery plan was first sent to the Commission in April.

The last time the sincere cooperation principle was breached was when the British government refused to nominate a Commissioner a few months before exiting from the EU.