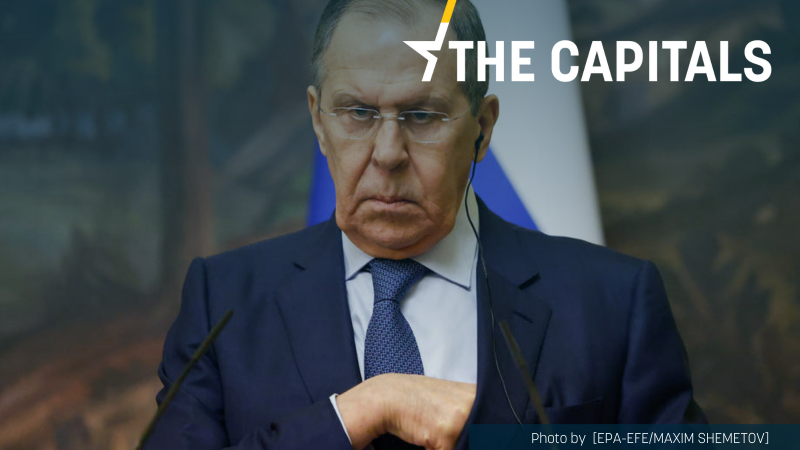 During an interview with Russia Today, Lavrov blasted NATO and Western leaders, adding they are not interested in defence and used the instance of NATO attacking Yugoslavia in 1999. [EPA-EFE/MAXIM SHEMETOV]

Russia’s Foreign Minister Sergey Lavrov has alleged mercenaries from Albania, Kosovo, and Bosnia and Herzegovina have been recruited and transferred to Donbas in Ukraine to fight against Moscow-backed rebels, something vehemently denied by local governments. The Russian embassy in Tirana however, did not respond to requests for clarification.

During an interview with Russia Today, Lavrov blasted NATO and Western leaders, adding they are not interested in defence and used the instance of NATO attacking Yugoslavia in 1999.

He continued that the former Yugoslavia area is “far from booming” and said Kosovo and other Western Balkan countries are “becoming grounds for criminality”.

“There are terrorists, drug traffickers. It is a recruiting station for mercenaries engaging in United States-sponsored hostilities. There are claims that mercenaries from Kosovo, Albania and Bosnia and Herzegovina are being recruited to be transported to Donbas, and other nations, in order to destabilise Russia,” he said.

Lavrov added these claims are being verified but did not elaborate on how.

Meanwhile, government officials in the three accused countries have denied the claims, describing them as baffling.

In Kosovo, Blerim Vela, the president’s chief of staff, blasted the claims as “fake news” and said they are part of a parcel of misinformation that seeks to justify military action against Ukraine.

In Bosnia, the security ministry denied the claims and said that according to their data, no citizens have travelled to Ukraine to fight.

But analysts have concerns that allegations of this kind could be used to destabilise further already fraught relations between Serbia, backed by Russia, and Kosovo, supported by the US. Similar worries have been raised in BiH, where tensions are simmering between the Croat and Bosniak factions and the Serb-entity Republika Sprska.

Vučić to discuss with Russian officials

Meanwhile, Nikolai Patrushev, secretary of the Security Council of Russia, is scheduled to speak with Serbian President Aleksandar Vučić in Belgrade on 28 February, the Russian website Balkanist.ru has reported.

The meeting will focus on Lavrov’s claims about Western Balkan fighters, although Russia has not publicly accused Serbia of sending mercenaries.

Last week, the Serbian president reiterated that Serbia was on the European path but “won’t spoil” relations with Russia and China and, therefore, will not join NATO.

“For seven or eight years we’ve been cautioned that we won’t be able to be on good terms with everyone, that we can’t sit in two chairs for much longer, but they don’t understand that we only have one, Serbian chair, which we love more than any other, and which we wouldn’t give away for anything,”Vučić said.

“Serbia has been working slowly and silently, preserving Kosovo and protecting our people wherever they may be living in the territory of former Yugoslavia. There haven’t been wars either,” he added.