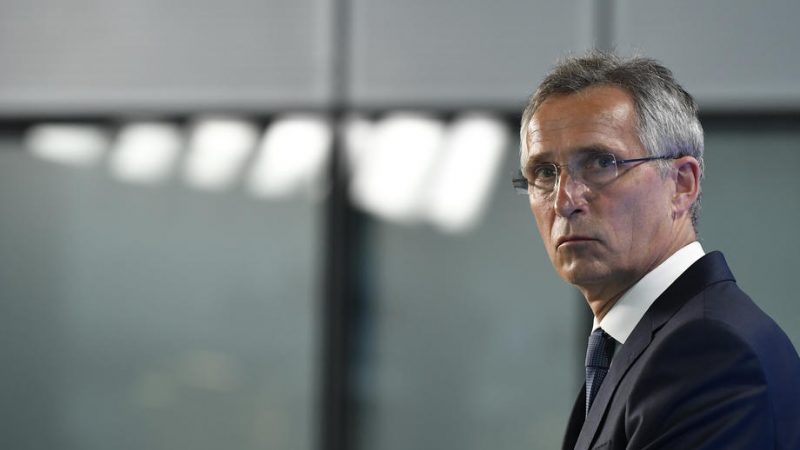 Stoltenberg made the statement after meeting with Serbian President Aleksandar Vučić, who told a joint news conference that he had received assurances from NATO’s Secretary General regarding security and protection in the West Balkans. [EPA-EFE/JOHN THYS]

All 30 NATO members, including the US, will remain committed to the KFOR mission in Kosovo and there will be no changes to KFOR’s mandate, NATO Secretary General Jens Stoltenberg said in Brussels on Monday, refuting rumours that some powers were asking for KFOR to withdraw.

Stoltenberg made the statement after meeting with Serbian President Aleksandar Vučić, who told a joint news conference that he had received assurances from NATO’s Secretary General regarding security and protection in the West Balkans.

“When it comes to certain rumours […] Stoltenberg was very clear about the necessity of preserving peace and stability in the region, as focused on the role of KFOR in maintaining stability,” said Vučić.

Asked how NATO viewed announcements from certain countries, especially Croatia, to deploy more troops in KFOR, Stoltenberg replied that all NATO members coordinated on that matter in line with the guidelines set by all members of the Alliance based on the mandate established by the UN Security Council’s Resolution 1244, which also applies to Croatia.

Meanwhile, the Croatian army’s Motorised Company was seen off at a barracks in Gospić on Monday, leaving for the NATO-led Operation KFOR in Kosovo for six months as part of the 35th Croatian contingent there, the defence ministry said. It has 99 members, including nine women, and will operate as part of a multinational battalion, led by Italy, together with the troops of Austria, Italy and Slovenia.

Serbia was critical about the new Croatian military unit going to Kosovo.

“Our national security neither begins nor ends on the state border but is susceptible to geographically distant processes. That’s one of the reasons for the stronger involvement in Operation KFOR, whereby we wish to help to build a safer world for all those living in Kosovo, the region and, indirectly, for us. Our soldiers will perform a wide spectrum of tasks, the company is excellently trained and ready to take its role in KFOR,” Admiral Robert Hranj said. (EURACTIV.rs | betabriefing.com, Željko Trkanjec | EURACTIV.hr)