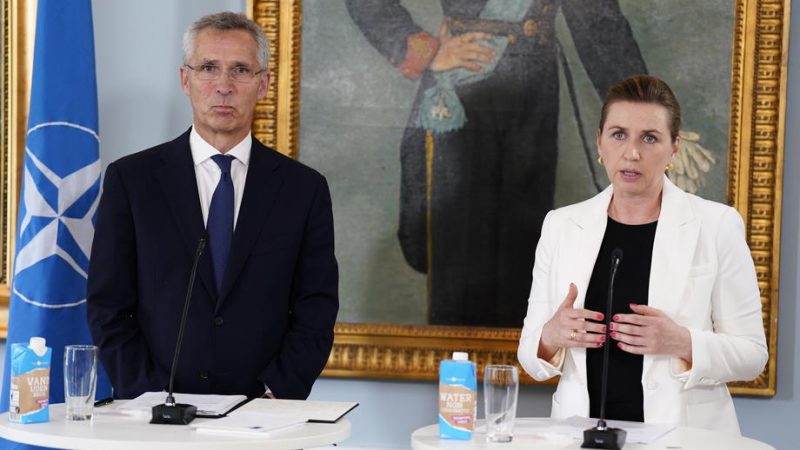 NATO Secretary-General Jens Stoltenberg visited Danish Prime Minister Mette Frederiksen on Thursday and addressed the latest challenges that the region is facing due to Sweden and Finland having recently applied for NATO membership. [EPA-EFE/MARTIN SYLVEST]

NATO Secretary-General Jens Stoltenberg visited Danish Prime Minister Mette Frederiksen on Thursday and addressed the latest challenges that the region is facing due to Sweden and Finland having recently applied for NATO membership.

During a press conference in Copenhagen with Frederiksen, Foreign Minister Jeppe Kofod from the Social Democratic party, and Defence Minister Morten Bødskov, Stoltenberg discussed the latest security development regarding Russia’s invasion of Ukraine and the upcoming NATO summit.

“With Sweden and Finland seeking to join NATO, we face an important and historic NATO summit in June, where we must ensure that the Alliance continues to adapt to the new security policy reality,” reads a press release from Frederiksen’s office.

With an aggressive Russia, increased influence from China, terrorist threats and new technologies, more must be expected from NATO allies, including Denmark, said Frederiksen.

In that spirit, she declared that Denmark’s long-term commitment to contribute 2% of gross domestic product to NATO is “necessary not only for NATO but also for Denmark’s security.”

Stoltenberg argued that NATO could be strengthened if the EU increased its defence efforts.

“It is good that the EU is doing more together on defence,” he said when asked what he thinks about the upcoming Danish referendum on an EU defence opt-out. On 1 June, Danes will vote on whether or not to continue to opt-out of the EU and defence policy that has existed since 1993.

“NATO will take a quick decision on the membership of the two countries,” he said, adding that the alliance is “handling it as one process, and the goal is to get a decision as soon as possible for both countries.”