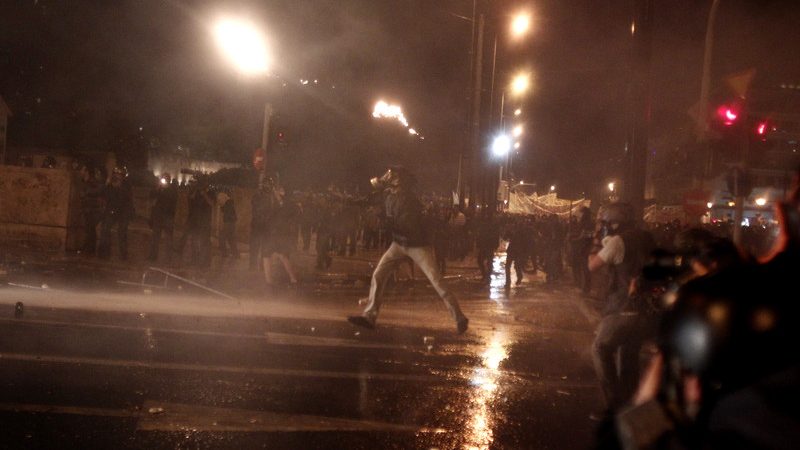 For journalists and photo reporters, this is a clear sign of attack against the freedom of press. [EPA/ALKIS KONSTANTINIDIS]

The Minister of Citizens’ Protection Michalis Chrysochoidis said the main objective is to protect the physical integrity of journalists in case of riots during a demonstration.

But journalists and photo reporters took this is as a clear sign of an attack against the freedom of the press.

“The ban on journalists’ access to the scene of events, in addition to a serious restriction on the freedom of the press, can also be seen as a harbinger of what events will unfold there,” commented professor Giorgos Pleios, who is also a member of the independent Greek National Council for Radio and Television.

Pleios added that not even Hungary’s PM Viktor Orbán had attempted to take such an action.

The journalist association are now threatening to take the case to international forums and have urged the conservative government to immediately withdraw the bill.

Speaking to MEGA TV, the minister explained that in recent years, “I have received many complaints, mainly from foreign journalists who have been beaten, asked for protection.”

Riots and violence are common in Greek protests, leading even to deaths in the past, and several governments have failed to take action.

However, the opposition says the government aims to create a “police-state” to crack down on social reactions to a difficult economic situation that is coming up due to the pandemic.

Greece’s former FM Nikos Kotzias told EURACTIV earlier this month that the government wanted to “pre-empt” a situation similar to the 2010-2015 period, when several social movements emerged on the back of fighting austerity-driven policies.

“I’m afraid we will get there, but with spontaneous movements that will be out of control, that will have no plan, no vision, they will just express anger,” Kotzias warned and suggested the creation of a front of progressive powers.