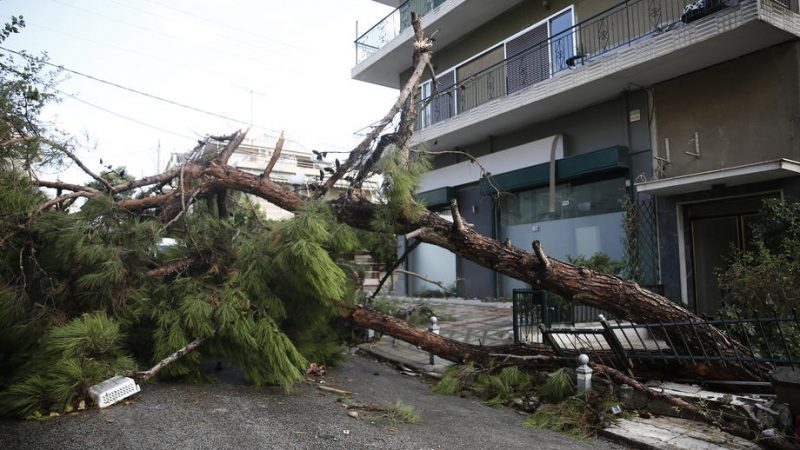 Greece is bracing for the second day of heavy rain and floods as the stormy weather front dubbed ‘Ballos’. [EPA-EFE / ALEXANDROS VLACHOS]

Greece is bracing for the second day of heavy rain and floods as the stormy weather front dubbed ‘Ballos’, which has been pounding the country since the early hours of Thursday, is expected to worsen. All schools in the Attica region and other parts of Greece will also be closed on Friday.

Minister of Civil Protection and Climate Crisis, Christos Stylianides, has told all workers to avoid travelling and work from home. Roads have been closed in certain parts of Athens, including the seafront.

Following the Athena storm, which pounded the fire-ravaged island of Evia and other parts of Greece over the weekend, Ballos has brought heavy rain and thunderstorms to much of the country. Temperatures in Athens have dropped to 17 degrees Celsius and 6-8 degrees in Thessaloniki. These temperatures are below average for the season.

Roads have flooded in several districts of Athens, primarily in the west, causing power outages in some cases. The fire department has been called to assist in more than 380 incidents in Attica. Emergency services rescued thirty people from rooftops in Corfu, where the regional authorities declared a state of emergency.

“As of yesterday, the fire department, regional authorities, and all other forces involved had been fully distributed and were ready for the storm. I must stress that as a result of this planning, we have prevented potentially unpleasant incidents,” said Evripides Stylianides, minister of Climate Crisis and Civil Protection and ex-commissioner.

In coordination with regional authorities and municipalities, Stylianides said that they removed residents from properties near rivers or locations where there is a significant risk of flooding in northern Evia, ravaged by wildfires this summer.

Dozens of people were evacuated from their houses in the island’s north, and a similar scene could be found in Alepochori, Crete, which was shaken by an earthquake last month. Repeating the government’s civil protection philosophy that was criticised last summer during the forest fires, Minister Stylianides said that the government’s priority is to save lives and asked citizens to follow the instructions given by the European emergency number 112 and avoid movement if possible.

Main opposition leader Alexis Tsipras commented that the state generally has long-standing weaknesses in handling extreme weather conditions. However, he said it’s the first time in the country’s history that the state is completely paralysed.

“But [the state] not functioning at all, neither in the rain, nor in the fire, nor the snow, is something we have never experienced before. I wish courage and endurance to our fellow citizens who are being tested”, he said.