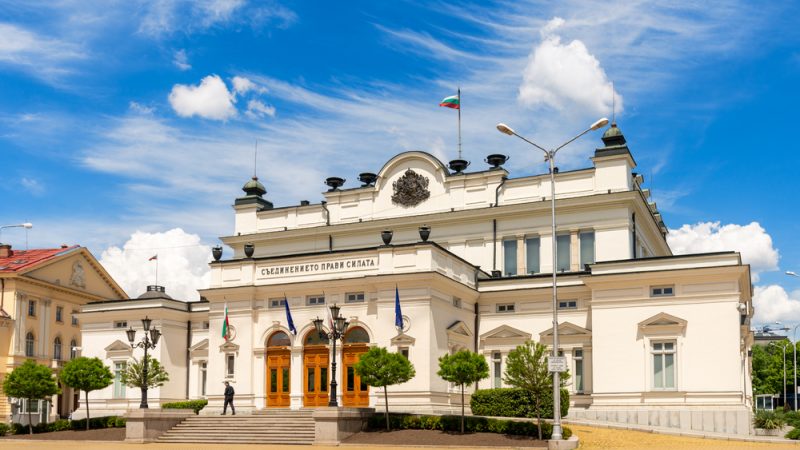 Despite the disagreements between the coalition partners, there appeared to be a consensus that the tense geopolitical situation required compromises. [Shutterstock/Alex Segre]

Bulgaria risks early elections after the leader of one of the parties of the four-way coalition announced it was leaving the cabinet because of disagreements over the budget and plans by the prime minister to lift the veto on North Macedonia starting EU accession talks.

Slavi Trifonov, former showman and leader of the populist party “There are such a people”, announced in a TV appearance on Wednesday his departure from the coalition and the withdrawal of his four ministers from the cabinet.

Bulgaria’s fragile coalition, led by Prime Minister Kiril Petkov, was formed half a year ago, and has since been divided on key issues like sending weapons to Ukraine, adopting the euro, and more.

Besides Petkov’s “We continue the Change” and Trifonov’s “There is such a people”, the coalition includes Democratic Bulgaria, a centre-right force, and the Bulgarian Socialist Party.

Despite the disagreements between the coalition partners, there appeared to be a consensus that the tense geopolitical situation required compromises.

Therefore Trifonov’s announcement was a bombshell.

The former showman, known as a hardliner vis-à-vis Skopje, cited the budget update and North Macedonia as the two reasons for his party leaving the coalition. He also voiced strong criticism towards Petkov and Deputy Prime Minister and Finance Minister Asen Vassilev.

According to him, the ministers of “Change Continues” are leading the country to bankruptcy, and Petkov is committing a national betrayal because he is doing everything to lift Bulgaria’s veto on the start of Skopje’s EU accession talks despite the parliamentarian consensus that EU accession talks can start only when North Macedonia fulfils the bilateral good-neighbourly agreement.

Trifonov also said that the government’s economic measures will only increase inflation and questioned the lack of efforts to reveal corruption schemes from the previous government, asking “where is the fight against the dirty money?”

Toshko Yordanov, a leading member of Slavi’s party, said there were memos of the Bulgarian foreign ministry relating what Petkov had said to Western counterparts, proposing a “parallel track” allowing lifting the veto, while the unsolved issues between Skopje and Sofia would become part of a process overseen by the EU. Yordanov said that such a process does not contain the slightest guarantee that issues would be solved.

Petkov hit back with accusations that Grozdan Karadzhov, minister of regional policy appointed by Trifonov, had asked for 3.6 billion leva (€1.8 billion) to be paid to road construction companies close to former Prime Minister Boyko Borissov. The former prime minister has been accused of syphoning state funds via these companies, although evidence has not been provided.

Petkov said he was confident that the cabinet would continue to function with the support of responsible MPs from Trifonov’s party.

Democratic Bulgaria and the Socialist Party announced that they would stick with the government, stating the country does not need chaos and new elections.

The three parties that remain in the coalition will now have 109 MPs in the 240-seat parliament, meaning they are 12 MPs short of a parliamentary majority.

Yordanov however said that MPs from “There is such a people” would not become traitors and would stick to the party line.

According to them, early elections are likely to favour pro-Russian political forces such as “Vazrazhdane” (Revival) of Kostadin Kostadinov, which has 13 MPs. Two other similar forces might enter parliament.

The end of this coalition would return Boyko Borissov to power and would push to the forefront Kostadinov and other leaders of pro-Russian forces, wrote Petyo Tzekov, editor of Sega daily.