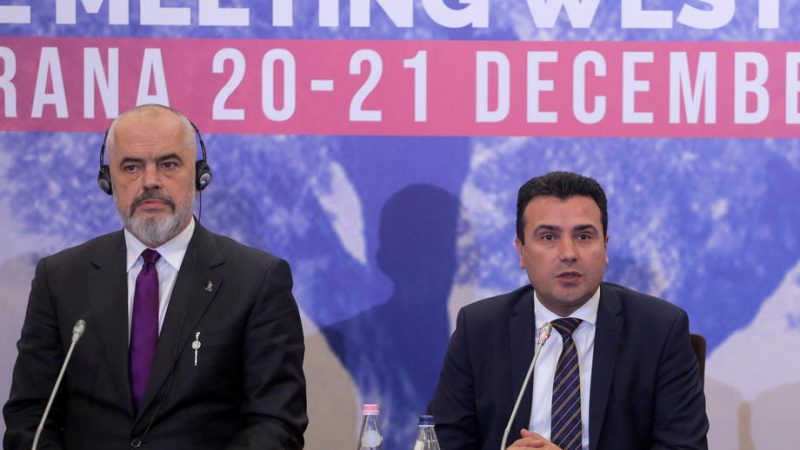 The elections in Albania are to be held on 25 April. [EPA-EFE/MALTON DIBRA]

North Macedonian Prime Minister Zoran Zaev called on Macedonians who hold an Albanian passport to vote for his counterpart’s Edi Rama’s Socialist Party in the elections in Albania to be held on 25 April.

“I call on all of you to vote number 12 in the 25 April elections, to support […] the Socialist Party,” Zaev told Albanian-Macedonians, exit.al and albanianews.it reported.

Rama has been critical of Bulgaria for making obstacles in North Macedonia’s beginning of EU accession negotiations. Rama and Zaev have together with Serbian President Aleksandar Vučić agreed to form a “mini-Schengen” in order to improve life and the economy in the Western Balkan region until the EU opens its doors to them.

On top of that, Zaev’s Social Democratic Union of Macedonia (SDSM) and Rama’s Socialist Party (PS) – are both part of the Party of European Socialists.

Macedonians are one of the five minorities officially recognised in Albania, besides Greeks, Serb-Montenegrins, Roma, and Aromanians. The last census conducted in 2011 puts their number at around 6,000, though some NGOs claim it to be higher.

Vučić said that it is known that behind Lulzim Basha, president of the opposition Democratic Party (DP) is former Albanian President Sali Berisha. “They are talking about Ethnic Albania and I am very happy to be the biggest obstacle to this issue”, said Vučić. (Željko Trkanjec | EURACTIV.hr)