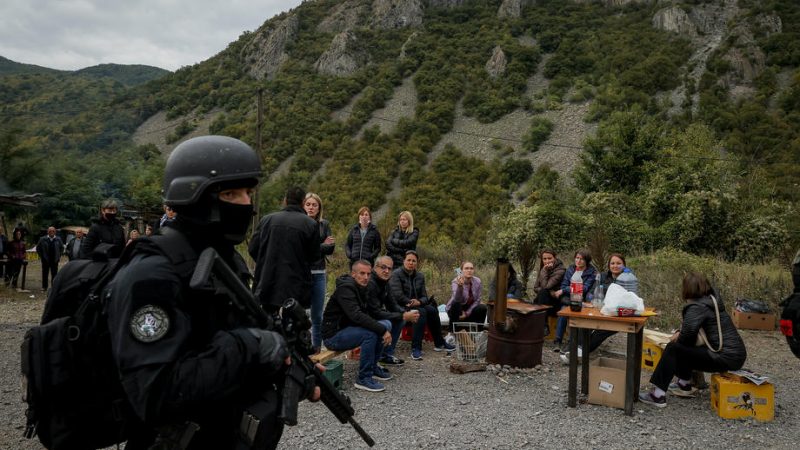 Belgrade and Pristina should find solutions to defuse the situation and agree on a way to move forward, said Borrell. [EPA-EFE/VALDRIN XHEMAJ]

EU top diplomat Josep Borrell told both Serbia and Kosovo on Sunday that any new provocations or unilateral and uncoordinated actions “are unacceptable” and said he was continuing to closely follow developments in northern Kosovo. Meanwhile, US Deputy Assistant Secretary of State for European and Eurasian affairs, Gabriel Escobar, said “Serbia and Kosovo should refrain from detrimental rhetoric and discuss the issue of license plates in Brussels, instead of militarising the current situation at the border,” while the Russian Ambassador to Belgrade Alexander Botsan-Kharchenko Stefanović accused the US and the EU of closing their eyes to the North Kosovo situation.

“Serbia and Kosovo need to unconditionally de-escalate the situation on the ground, by immediately withdrawing special police units and dismantling roadblocks,” Borrell said in a statement issued by the European External Action Service.

Belgrade and Pristina should find solutions to defuse the situation and agree on a way to move forward, said Borrell, stressing that the EU “will actively support these efforts.”

“Both Kosovo and Serbian leaders are fully responsible for any risks to the safety and well-being of local communities in both Kosovo and Serbia. I stressed this in my calls with President (Aleksandar) Vučić and Prime Minister (Albin) Kurti this week,” Borrell was quoted as saying.

He noted that the EU-mediated dialogue remained the only platform to address or resolve any issues between the two sides, including matters pertaining to the freedom of movement or vehicle license plates, adding that he “strongly urge[s] Kosovo and Serbia to use it.”

The US’ Escobar said that, together with its European partners, Washington was actively engaged in the crisis caused by increased tensions between Serbia and Kosovo, and hoped for progress in the next seven days.

“We believe that both sides should refrain from detrimental rhetoric and focus their attention and energy on the EU-mediated dialogue that we support 100%,” Escobar said, adding that he was in daily contact with the EU representative for Serbia-Kosovo talks, Miroslav Lajčak, who he said had some good suggestions for the car plate dispute.

Serbian Prime Minister Ana Brnabić previously said Saturday that the leaders of some countries she met with in New York now saw clearly how serious the situation with Kosovo is.

“It’s important for me to note that I was a little surprised by how clear it now seems to some leaders in the world that this situation has never been more complex, more serious, and truly on the verge of conflict. They asked me what can be done to move away from that edge. I said — dialogue,” Brnabić told the Serbian Broadcasting Corporation.

Brnabić, who took part in a session of the UN. General Assembly in New York, said the reactions of the leaders with whom she had discussed Kosovo on the sidelines of the conference “were mostly better” than she expected.

She also commented on a statement by Albanian Prime Minister Edi Rama, who called on UN members to recognise Kosovo’s independence stating that it was “a call to recognise the new reality in Europe.”

“The best response came from UN Secretary-General Antonio Guterres. His first sentence in our meeting was to say ‘Kosovo is not a state to us,’” the Serbian prime minister said.

Serbian Defence Minister Nebojša Stefanović said on Sunday that the condition for defusing tensions in northern Kosovo and returning to dialogue was the withdrawal of Kosovo’s special forces from the territory. He stressed Belgrade was willing to talk, with a view to preserving lives and ensuring peace and stability.

Accompanied by Serbian Chief of Staff Milan Mojsilović and Russian Ambassador to Belgrade Alexander Botsan-Kharchenko, Stefanović inspected forces in the barracks in Raška and at the Rudnica base, near the border with Kosovo, which are both in a state of elevated combat readiness.

Serbian army jets continued to fly over the area around the Jarinja crossing with Kosovo on Sunday.

The Russian ambassador said Moscow was very concerned over the events in ‘northern Kosovo and Metohija’ and supported Belgrade’s efforts to de-escalate what he described as a very dangerous situation.

He accused “Western partners, the EU and U.S.” of applying double standards and closing their eyes to a situation that they did not want to understand, including who was to blame for what was happening.

NATO Secretary-General Jens Stoltenberg tweeted after phone calls with Serbian President Aleksandar Vučić and Kosovo Prime Minister Albin Kurti that the conversations were about “the need to de-escalate in the north of Kosovo”. NATO will ensure a secure environment and freedom of movement for all, he added.

According to a press release issued by the presidency, Vučić said after speaking to Stoltenberg that it was now seven days of “the complete occupation of northern Kosovo and Metohija by armoured vehicles orchestrated by Pristina, while the entire international community remains ‘thunderously quiet’.” Everyone “is suddenly concerned when they see Serbian helicopters and aircraft flying over the territory of Serbia proper because I suppose they shouldn’t exist or fly” until the Kosovo PM or someone in the international community allows this, he added.