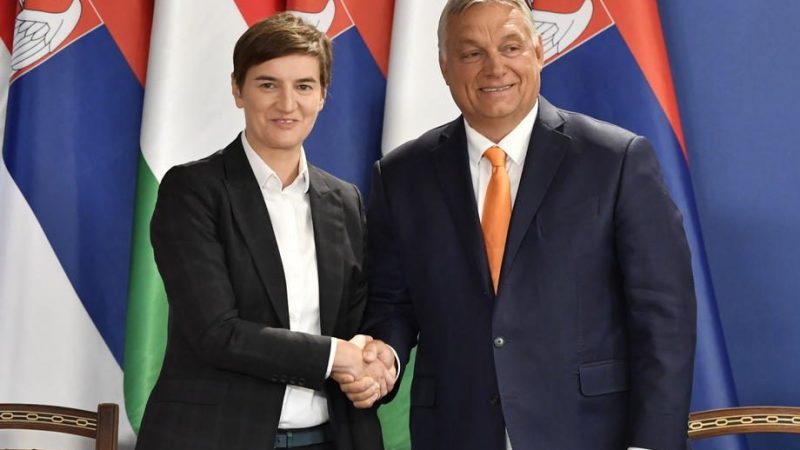 Hungary is fully committed to Serbia’s European integration, Hungary’s PM said, adding that both countries would not be protected if the other was not secure. [EPA-EFE/ Zoltan Mathe]

Civil society organisations in Serbia and Hungary support migration, Hungarian Prime Minister Viktor Orban said in Budapest during a joint government session on Wednesday, adding that this was in complete contradiction with the two countries’ security interests.

Both countries agreed to “renew central Europe,” he added.

“It is currently not enough to just renew central Europe, we must also protect it, we must guarantee the security of central Europe. Events in Afghanistan herald a huge wave of migrations, on land, which could put Serbia and Hungary into a very difficult situation,” he told reporters after the joint session.

Hungary is fully committed to Serbia’s European integration, Hungary’s PM said, adding that both countries would not be protected if the other was not secure.

Serbian Prime Minister Ana Brnabić said Serbia was “in a specific position as a non-EU member” when it came to a potential new wave of migrations. “A joint European policy must be in place” on that matter, she added.

“Not a policy of the European Union, but a joint policy of Europe, because Serbia is on a transit route, and migrants come to Serbia from EU countries, in order to proceed to other EU countries,” Brnabić said.

Serbia’s prime minister also pointed out that Serbia was already contemplating options in case such a common policy were not adopted and that she was pleased a coordinated action was being discussed with Hungary.

Brnabić and Orban signed an agreement on cordial relations and strategic partnership. The relevant ministers also signed seven documents on cooperation in the fields of commerce, agriculture and diplomatic relations.