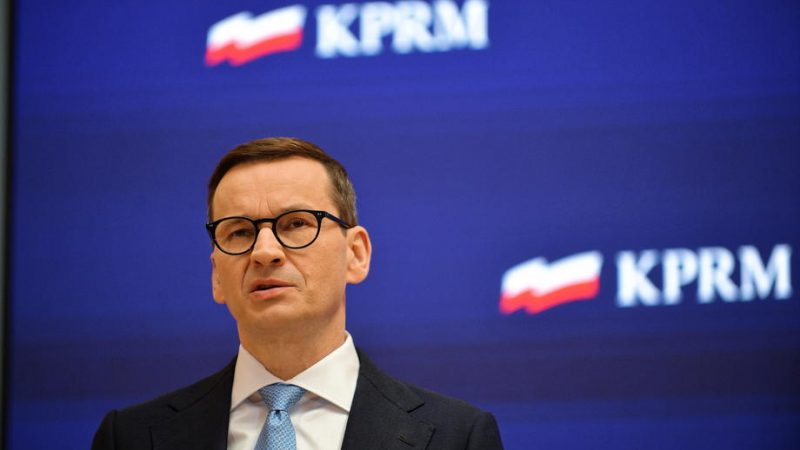 During the Nationwide Congress of Youth Dialogue on Saturday, Morawiecki criticised Norway for its increasing earnings from selling fossil fuels as a result of the war in Ukraine. [EPA-EFE/Marcin Obara]

During the Nationwide Congress of Youth Dialogue on Saturday, Morawiecki criticised Norway for its increasing earnings from selling fossil fuels as a result of the war in Ukraine.

He said Norway unintentionally gained from the war and suggested that Oslo “should immediately share the gainings.” He also recommended young people write letters to their Norwegian peers to discuss the problem.

“The excessive earnings from selling oil and gas are put mostly in the Government Pension Fund (also known as the Oil Fund) for the next generations,” Vad Petersson said, quoted by NRK. While admitting that “the income from oil has increased” as a consequence of the war in Ukraine, he argued that “since the beginning of the year the fund’s worth has dropped by about 550 million NOK (about €53.6 million)”.

To reject Morawiecki’s argument concerning benefitting from Russia’s war on Ukraine, he added that “Norway has significantly contributed to supporting Ukraine, and will contribute even more”.

Jørn Holm Hansen, a senior researcher at the Norwegian Institute for Urban and Regional Research (NIBR), whom NRK said that Poland “has it in its genetic code” to verbally attack other countries and in this case, the attack “was meant to cover the rising problems” the mass influx of Ukrainian refugees is causing in the country.

However, Green MP Lan Marie Berg believes the additional earnings from the increased sale of oil should be put not in the Pension Fund but be spent on supporting Ukraine.

Morawiecki also faced criticism at home. Marcin Jakubowski, the mayor of Mińsk Mazowiecki town, said that Norway “spends billions of euros annually for its less affluent partners” in Norway Grants. “In the current edition, Poland will receive €809 million” from that source, he tweeted.