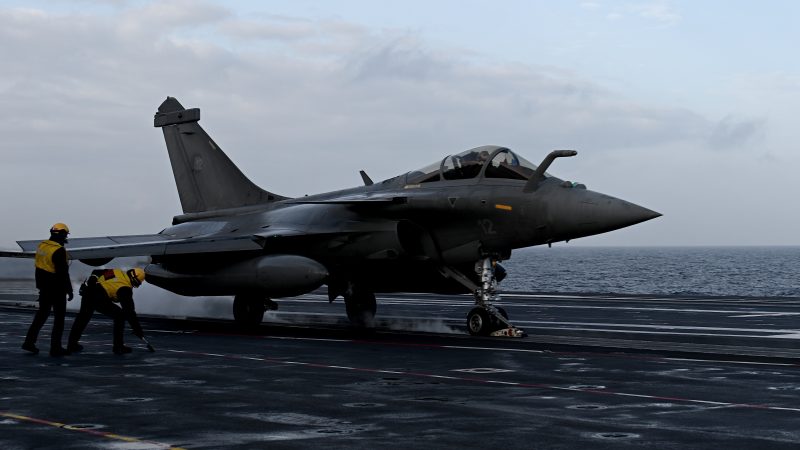 Military staff stand next to a Rafale jet fighter about to take off from the French aircraft carrier Charles de Gaulle at sea, off the coast of the city of Hyeres, France, 23 January 2020. [EPA-EFE/PHILIPPE LOPEZ]

The Greek parliament ratified a Greek-French contract to procure 18 Rafale fighter jets with extensive support from the majority and opposition, including from the centre-right New Democracy, leftist SYRIZA, socialist Movement of Change, and nationalist Hellenic Solution. Only the Greek Communist Party and DiEM25 voted against ratification.

Greece will proceed with procuring 12 used and six new French-made Rafale aircraft, which will arrive in three separate instalments between 2021 and 2023.

The parliament sent out a strong and cohesive message, said National Defence Minister Nikos Panagiotopoulos. However, he called on the opposition to back the initiative to reinforce the Armed Forces, underlining the potential threats for Greece in an unstable region, while parliamentary spokesman Ioannis Vroutsis said a common parliamentary response on national issues was crucial.

However, the rapporteur of the main opposition, George Tsipras, mentioned that the contract is riddled with mistakes and, as a result, could create major security problems in the future.

Despite SYRIZA’s disagreement on specific terms, Tsipras stated that the main opposition will support the bill with some reservations concerning strategic defence planning in order to guarantee that the armed forces will be reinforced by the procurement of the fighter jets.

Given that the Rafale contract is a first in what is likely to be a series of defence purchases from Greece, the arms industries of France, Germany, Netherlands, Israel, and the US are expected to show a greater interest in Greece in the next decade.