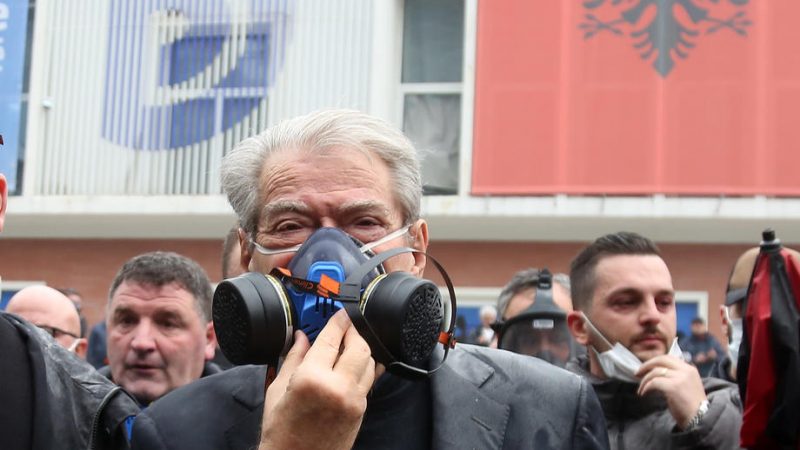 Following Saturday’s storming of Democratic Party headquarters by its own members, Prime Minister Edi Rama has reacted to the opposition party’s internal conflict by calling the warring leaders “clowns” and “political corpses”.

A violent protest erupted on Saturday as supporters of the ex-prime minister, president, and persona non-grata in the US, Sali Berisha, attempted to “take back” the party headquarters.

Since the autumn, tensions have been rising when external pressure over Berisha’s designation led to Chairman Lulzim Basha removing Berisha from the PD’s parliamentary group. As both Berisha and Basha refuse to leave, the former vowed to gain control over leadership and the headquarters “by any means”.

The result was several hundred protestors hurling objects at the building while others gained access after the door was breached with a battering ram, sledgehammers, and a crowbar.

Police and special forces dispersed the protestors with tear gas and water cannons over an hour into the demonstration.

Rama, head of the ruling Socialist Party, reacted by stating that Basha and Berisha are ‘clowns’ who were helping him by creating turmoil in the opposition.

“He works for Rama one says, he does Rama’s work, the other says. Believe me, when I see these two political corpses in the democrats of Tirana playing castles and blaming each other for who is my servant, I feel like giving the Democrats a conscientious tribute. Come let’s give Albania what we can, united as Albanians, as citizens, as people,” the prime minister wrote on Facebook.

Both Basha and Berisha held simultaneous press conferences following yesterday’s unrest. Basha condemned Berisha for the violence and damage caused to party headquarters and criticised the police for only arriving on the scene after more than one hour of conflict.

Meanwhile, Berisha denied that any significant violence had been used and said police intervention was unnecessary. He criticised authorities for stopping those involved and warned further protests would be held to take back the headquarters and entire party from Basha.

Furthermore, Berisha launched an attack on the media, accusing Reuters, Associated Press, and The Washington Post of being on the side of Rama citing their reporting of the event. Basha last week closed the PD’s newspaper, ‘Democratic Rebirth’, the first time since it was published after the fall of communism.

Berisha often accuses critics of being in the service of external influences or Rama. Most recently, he said his designation by the US State Department as persona non grata for “significant corruption” was a political move because of Rama’s friendship with billionaire George Soros.

As for the future of the PD, opinion is split over who should lead or whether new leadership elections should be held. As the only opposition party in the country with a significant number of seats in parliament, this division has potentially serious implications for democratic functioning in Albania’s parliament.