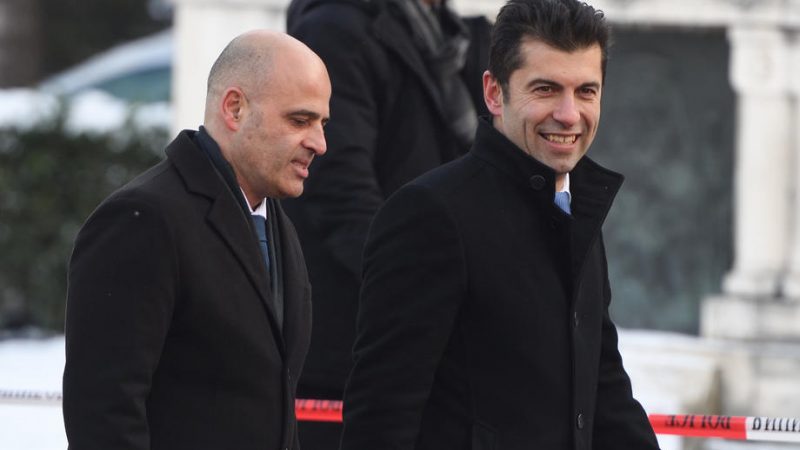 The prime ministers of Bulgaria and North Macedonia, Kiril Petkov and Dimitar Kovačevski met on Tuesday in Sofia in a new attempt to defuse tensions between the two neighbours.

“We are here because we are not afraid of crises and because we believe that we can solve them,” said PM Petkov. Talks included a joint meeting of the governments and came after Petkov visited Skopje on 18 January.

Dimitar Kovačevski also described the meeting as a success. He pointed out that in addition to politicians, there are experts in the working groups.

“Kiril and I are people who like Excel charts, deadlines and accomplishments. We will be here constantly and will participate in the work of the groups, asking for progress that will make the citizens of Bulgaria and Macedonia happy,” said Kovačevski.

Petkov welcomed the creation of joint working groups that will meet monthly to discuss projects on economics, infrastructure, EU cooperation, culture, and history.

There are currently no air or rail links connecting the two Balkan neighbours, so a memorandum to work on improving the state of Corridor 8, the infrastructure link that should connect both countries, has been signed.

The two sides also signed a declaration of intent to cut roaming charges between the two countries and speed up work to open a new crossing.

“I believe that this dialogue, this constructive work, will replace the nationalism, hate speech and discrimination,” Petkov said.

Bulgarian President Rumen Radev called for progress after he met with PM Kovačevski.

“Let us try to introduce the same approach (as the governments show) to solving open political problems. Let us finally clarify what are the short-term tasks we need to solve before we start negotiations”, said Radev.

A majority of 60.8% of Bulgarians believe Sofia should support North Macedonia’s EU membership bid, but only after Skopje implements the agreement it has with Bulgaria, Gallup International Balkan reported.