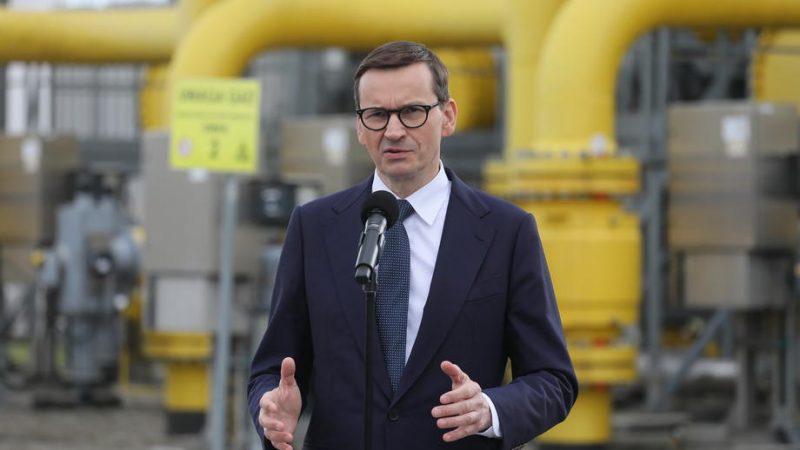 “Since today, when Russia stopped supplying Poland with gas, we have dropped any dependence from Russia,” said Morawiecki during a press briefing at a gas compression station in Rembelszczyzna near Warsaw. [EPA-EFE/PAWEL SUPERNAK]

On Wednesday morning, Gazprom halted gas supplies to Poland under the Yamal contract for the refusal to pay for gas in roubles. However, because Poland has secured alternative gas sources, the shortages are no real threat, the government announced.

The decision by Russia to cut gas supplies to Poland will not result in gas shortages in the country, and the government will ensure the rise in prices will not hit individual consumers, said Morawiecki on Wednesday, reported RMF FM radio and Rzeczpospolita.

“Since today, when Russia stopped supplying Poland with gas, we have dropped any dependence from Russia,” said Morawiecki during a press briefing at a gas compression station in Rembelszczyzna near Warsaw.

By refusing to accept Russian conditions on gas supplies, Poland showed “it fights effectively for an independent Ukraine and defends itself against Moscow’s blackmail,” Morawiecki added.

The prime minister also assured Poland would not suffer from gas shortages since it has managed to accelerate its own production and has secured other import sources via interconnectors, the Baltic pipeline and other means. Households, hospitals, schools and public institutions do not need to worry about rising gas prices as the government decided to “prolong special gas tariffs” for those consumers until 2027, he added.

Most Polish experts agree with the government that the Kremlin’s decision to cut gas supply to Poland will not paralyse the country’s energy sector.

“For many years, Poland has invested in diversifying gas supplies by building infrastructure and signing agreements with other suppliers,” energy expert Jakub Wiech told RMF FM in an interview.

However, much will now depend on whether Russia decides to halt supplies to the West as a whole, Dawid Czopek from Polaris FIZ told Gazeta.pl news service.

“If not, Poland will still be able to buy Russian gas from Germany or Czechia. If yes, those countries will not sell gas to Poland because they will need it themselves,” he explained.

Meanwhile, Gazprom threatened that it would cut down on gas transit if fuel was syphoned off illegally, Reuters reports.