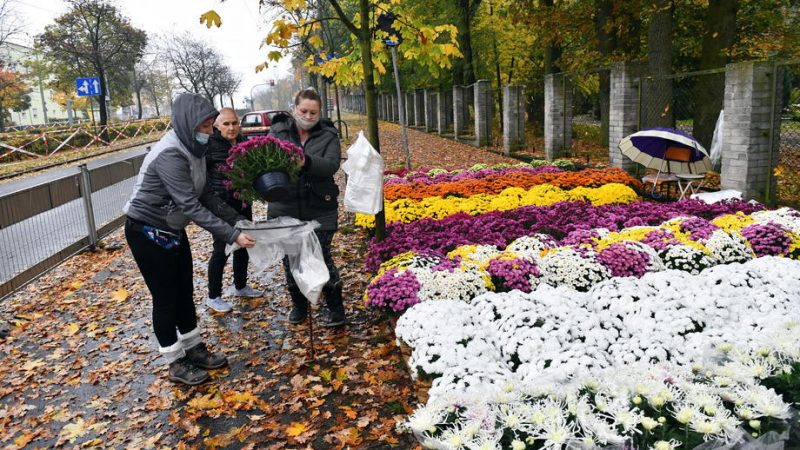 A flower vendor packs a pot of flowers outside the closed Central Cemetery in Szczecin, northwestern Poland, 01 November 2020. [EPA-EFE/MARCIN BIELECKI]

Sellers of flowers and candles suffered heavy losses as a result of the government’s decision to shut down all cemeteries for All Saints’ and All Souls’ Days.

The ministry will pay 20 zlotys (€4.4) for a pot and 3 zlotys (€0.66) for cut chrysanthemums. Applications will be received until 6 November.

Earlier this month, Polish Prime Minister Mateusz Morawiecki made a promise to help traders who prove their substantial financial losses resulted from cemeteries being shutdown.

The day before All Saints’ Day, Warsaw Mayor Rafał Trzaskowski launched a solidarity campaign “Buy a chrysanthemum” (“Kup pan chryzantemę”) and designated seven points across the city for selling flowers.

“Flowers can be used when the cemeteries are opened again,”  Trzaskowski pointed out.

The shutdown, which lasted from 31 October to 2 November and was announced by the government the day before the measure came into force, has resulted in huge losses for those selling chrysanthemums and candles.

In Poland, All Saints’ Day is a holiday celebrated by both Catholics and atheists who gather at cemeteries to commemorate their closest relatives. The flowers traditionally associated with that day are chrysanthemums.

Each year during the All Saint’s Day period, Poles spend close to 1 billion zlotys (€220 million) on candles, flowers, and petrol for traveling to the cemeteries. (Aleksandra Krzysztoszek | EURACTIV.pl)