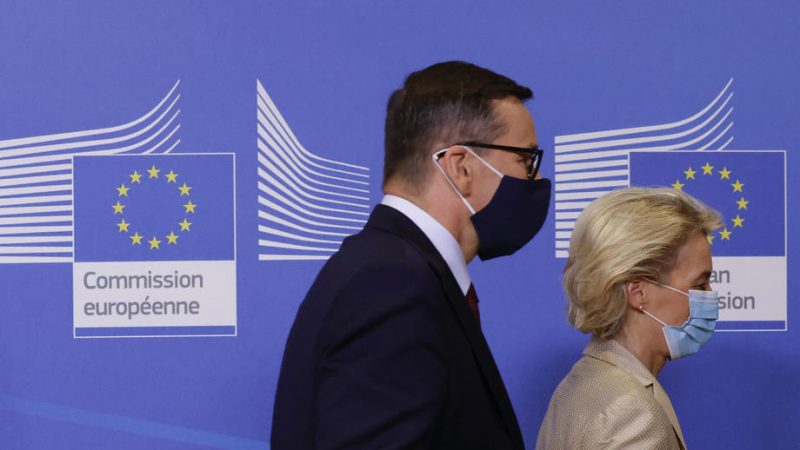 This was the first time a member of the ruling party openly stated it was considering withdrawing from the EU. [EPA-EFE/ PASCAL ROSSIGNOL]

Ryszard Terlecki, a leading Law and Justice (PiS) figure, who is at the same time the chief party whip and a deputy speaker of the Polish parliament, created an unexpected crisis when he told a conference in Karpacz that the EU “should be what is acceptable to us” and that “if it goes as it is likely to go, we must look for drastic solutions. The British showed us that the dictatorship of the Brussels bureaucracy did not suit them and they turned around and left”.

Following public outcry, he clarified his position on Twitter on Thursday, saying “Poland was, is and will be a member of the EU. ‘Polexit’ is a hoax invented by the Civic Platform and the TVN24 [US-owned TV channel critical of the government]”.

“I believe that the present apathy and crisis in the EU will be overcome,” he added. Terlecki is one of the closest advisors of PiS leader Jarosław Kaczyński, and Warsaw’s political commentators believe that Terlecki says what Kaczyński thinks.

This was the first time a member of the ruling party openly stated it was considering withdrawing the country from the EU.

In response to the initial comments, MEP Radosław Sikorski (EPP) said comparing Poland to the UK is misleading and that the consequences of leaving the EU for Poland and the Poles would be devastating.

“The UK is an island, it has London, pound sterling, the Beatles, Shakespeare and nuclear weapon. They will be alright. We, after leaving the EU, would be again between Germany and Russia,” he said.

Government spokesperson Piotr Muller also cleared the air. “We will not leave the European Union, because leaving is not beneficial for us. We want Poland to remain an EU member and simultaneously for Poland to play a subjective role,” he said.

But Terlecki’s words also prompted some to call for a discussion on a possible withdrawal from the bloc.

“It’s time for a reliable assessment of whether the British path is better for Poland,” tweeted governmental MP Janusz Kowalski.

Another prominent PiS activist, a 79-year old former Senator, called for the Polish government not to allow for “complete ‘vassalisation’ of Poland by the European Union” and to stop paying Polish contributions to the EU budget. “We maintain the Union and its huge number of freeloaders with massive clerical incomes expanded beyond any reason,” he added.

Prime Minister Mateusz Morawiecki also commented on the incident: “Regardless of the fact that I see such an action on the [Commission’s] side, I think we will be able to close all doubts and not create unnecessary tension here,” he said, referring to the ongoing legal battle between Warsaw and Brussels.

“Of course there is no talk of Polexit,” he added.