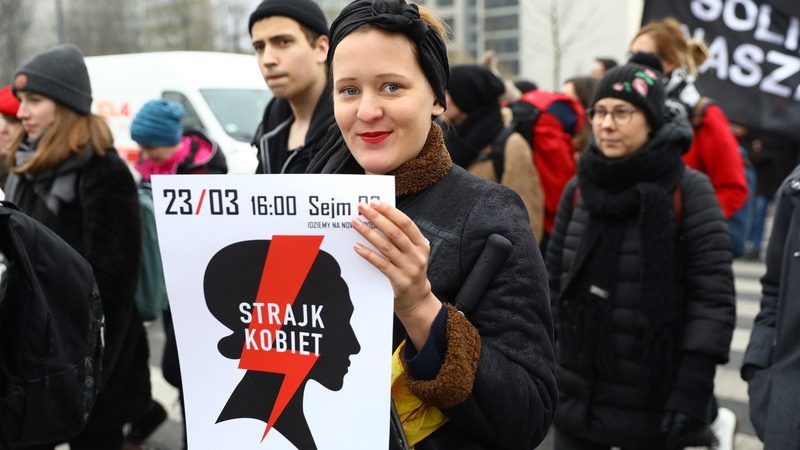 A woman with a placard 'Women's Strike' takes part in the nationwide women's strike 'Black Friday' to protest against the tightening of the abortion law in Warsaw, Poland. [EPA-EFE/RAFAL GUZ]

Poland’s Women’s Strike movement (OSK) – which has organised ongoing nationwide protests against the top court’s ruling introducing a near-total ban on abortion – announced on Sunday evening the lineup of its Consultative Council (Rada Konsultacyjna), similar to the Coordination Council created to facilitate a democratic transfer of power in Belarus.

The Consultative Council was set up “to clean up the mess” in Poland, ruled by the conservative Law and Justice party (PiS), by developing “a way out of the collapse in 13 key areas” through the coordination of actions of many organisations.

Besides focusing on abortion rights, the Women’s Strike group is also committed to fighting for LGBT rights; combating violence against women; promoting the separation of church and state (secular state – discontinued state funding of the Catholic Church); and saving the planet.

The Council also issued an ultimatum to the government, calling for 10% of the country’s GDP to be allocated to the health service and “treatment on a European level”.

“We give seven days for the money that is given to the church and the Polish Television (TVP) – criticised for bias in favour of PiS – to go entirely to health care,” said OSK’s Agnieszka Czerederecka.

Protests in Warsaw and other Polish cities have been ongoing since 22 October, the day Poland’s Constitutional Tribunal rendered existing laws that allow abortions due to foetal defects unconstitutional, making abortion almost illegal in Poland.

The “March to Warsaw” passed through the capital city on Friday, where the number of protesters peaked at over 100,000 despite the COVID-19 pandemic. As flares were sometimes thrown at participants, the police intervened.

“We are looking at Belarus and see the importance of regularity. We want the blockades to be repeated every week”, said OSK’s Marta Lempart.

Many of Poland’s roads and intersections will be blocked on Monday.