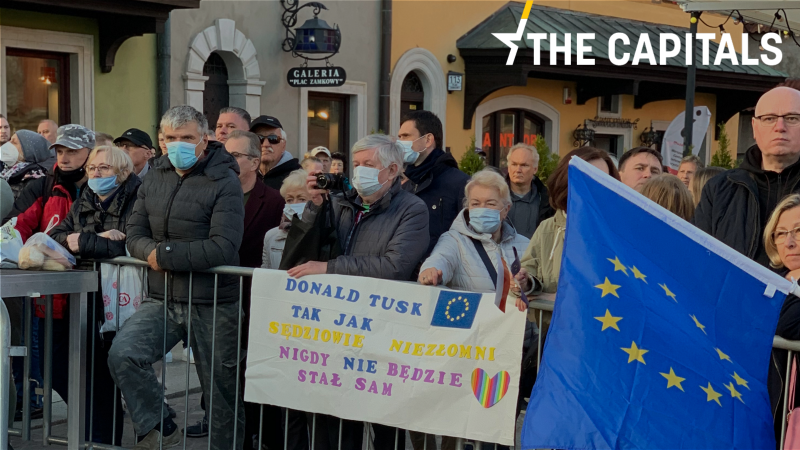 Only in Warsaw, up to 100,000 people gathered on the Zamkowy Square, according to the city estimates. [Photo by Piotr Maciej Kaczynski, EURACTIV.pl]

On Sunday (10 October), some 200,000 people in 126 towns and cities across Poland, the rest of Europe and the world demonstrated against last week’s decision of Poland’s Constitutional Tribunal that ruled EU basic treaties are partially illegal.

In Warsaw, up to 100,000 people gathered in Zamkowy Square. Donald Tusk, former president of the European Council and current president of the European People’s Party, called for the protest to manifest the unity of opposition to the ruling. Critics believe that the Constitutional Tribunal is controlled by the Law and Justice (PiS) ruling party and that they are actively pursuing an exit policy, aka “Polexit”.

“We stay”, “Only European Poland”, “We are Europe” were popular slogans of the pro-EU crowd gathered in Warsaw. During the protest, a group of nationalists (not PiS-affiliates) tried to crash the Tusk-led gathering. While speaking from the podium, Wanda Traczyk-Stawska, a 94-year-old WW2 veteran, addressed the nationalists’ leader by saying: “shut up, boy”. “Europe is my mother, too”.

Donald Tusk described the recent CT’s verdicts as being from “a group of disguised people who are violating the Polish constitution and have decided for Poland to leave the EU.” He alluded that some members of the Warsaw Tribunal have not been appropriately appointed. “There is no conflict between the Polish Constitution and the EU treaties”, he added.

Among many speakers in Warsaw was Marta Lempart, leader of the Women’s Strike, a coalition of NGOs protesting a previous CT ruling restricting the abortion laws last year. “We defend European values all the time”, she claimed. “The politicians, the EU institutions, they have an obligation to help us. We are the fortress of European values”, Lempart said, arguing that as long as Polish citizens are EU citizens, EU institutions need to defend their rights and their fights.

Tusk finished the meeting saying: “to be continued”.

The PiS government denies it pursues an exit policy.