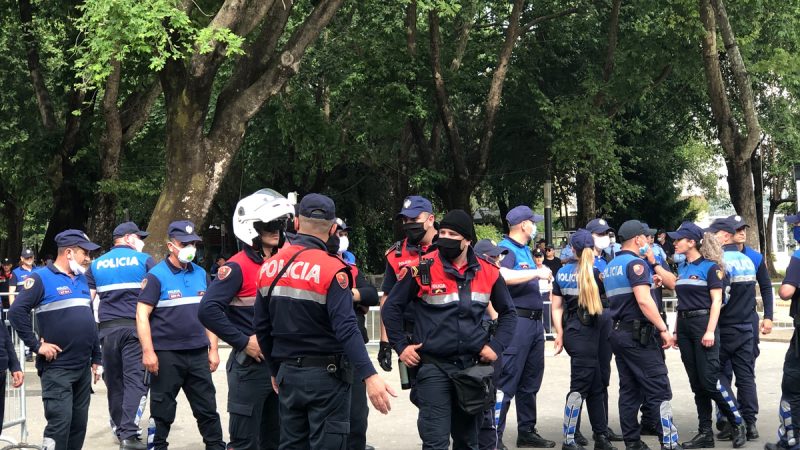 The list of assaults of media workers perpetrated by Albanian police continues to grow longer while the silence from institutions persists. [Shutterstock / EvisDisha]

Fax News journalist Ledio Guni was filming the eviction and demolition of citizens homes in the 5 Maji neighbourhood of the city. Scores of police were on site to force people out of their properties and make way for their razing to the ground.

Guni was forcibly grabbed, dragged, and removed from the vicinity while carrying out his work. RSF condemned the restriction on press freedom and said it cannot be tolerated.

The list of assaults of media workers perpetrated by Albanian police continues to grow longer while the silence from institutions persists.

RSF and the Committee to Protect Journalists condemned police action at a protest on 8 January where clearly identifiable media workers were targeted with tear gas and water cannons. Several were treated by medical professionals, and others suffered damaged equipment. A second incident took place in Shkodra when a journalist attempted to film a police special forces operation taking place in a public space.

Albanian authorities have been repeatedly called out over the indiscriminate use of these methods during protests, to the detriment of media workers, whose job it is to be there.

Over the last three years, there have been tens of cases of journalists who were physically prevented from filming or carrying out their work, being arbitrarily detained or even arrested while working, having footage deleted from mobile devices, and being asked to sign false declarations a condition of release.

The Albanian government has remained silent on the issue and has not responded to questions from international media watchdogs or the media themselves. Meanwhile, there have been no prosecutions of those who have committed crimes against journalists in the last few years, with issues ranging from death threats to physical assault.

Albania is an EU member hopeful and is waiting for the green light for accession talks to start formally. Press freedom remains a strained issue in the country, declines in transparency, working conditions of journalists, and the government’s attitude towards media workers remain challenging.

One response to “Police violence against journalists continues in Albania”