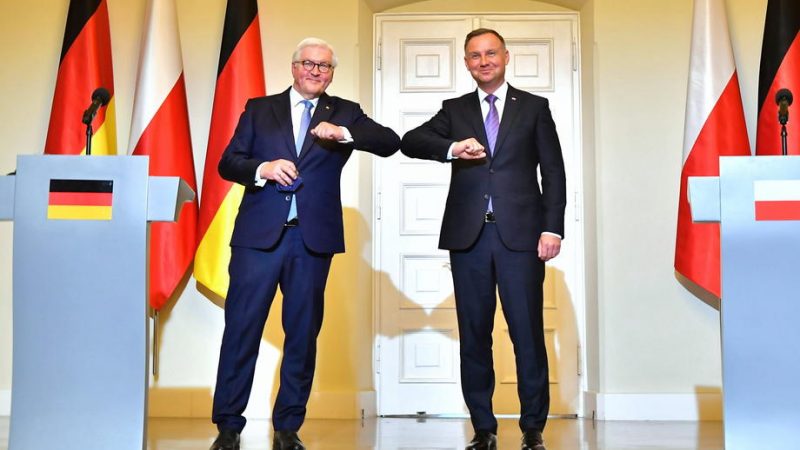 Duda called the 1991 Treaty of Good Neighbourship “a crucial element of Polish and German history, our joint present, as well as a strong foundation for the common future” and claimed the bilateral relations to be “stronger than ever.”

Thanking Steinmeier for his moving words from the 2019 speech at the 80th World War 2 anniversary, in which he paid tribute to Polish victims of Nazi aggression, Duda stressed the role of “casting aside taboos” between the two countries and appealed for honest dialogue.

In recent years, numerous questions have arisen that continue to divide the Polish and German governments. Apart from different stances on the Nord Stream 2 pipeline, Poland’s right-wing government repeatedly raises the subject of war reparations, which according to the ruling Law and Justice (PiS) party, Germans still owe to Poland.

Leading nationwide daily Gazeta Wyborcza suggested, quoting its own sources, that the Polish government originally wanted the visit to be more high-level but that German Chancellor Angela Merkel had rejected Polish Prime Minister Mateusz Morawiecki’s proposal of intergovernmental consultations in Berlin on the day of the anniversary.

The reasons indicated by Gazeta Wyborcza were the rising tensions between Germany and Poland over Nord Stream 2, the situation in Ukraine, as well as the regular attacks on Germany by the Polish right-wing media and the state-controlled public broadcaster.

Another reason could be lead back to 2020, when some prominent PiS politicians, including the party’s leader Jarosław Kaczyński, opposed the nomination of Arndt Freytag von Loringhoven, former NATO Assistant Secretary-General for Intelligence and Security, because his father served in the German army, the Wehrmacht, during WW2.

After a few months of delay, the Polish authorities ultimately approved the appointment of Freytag von Loringhoven, allowing him to begin his service in Warsaw. (Aleksandra Krzysztoszek | EURACTIV.pl)