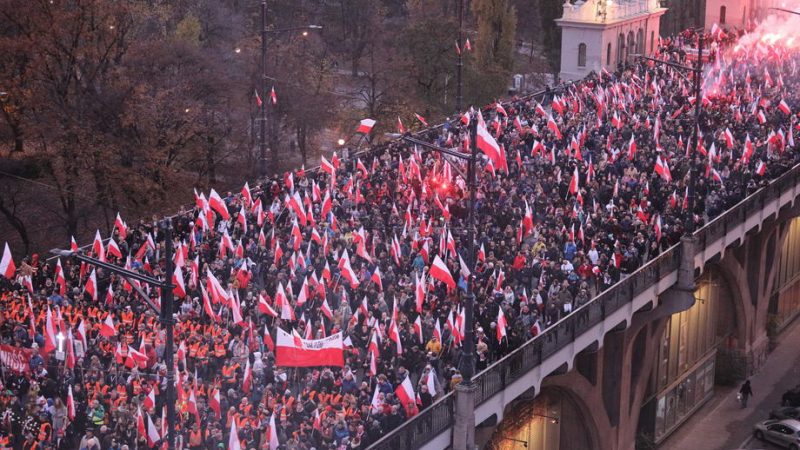 People take part in the March of Independence 2019 as they walk on the Poniatowski Bridge in Warsaw, Poland, 11 November 2019. [EPA-EFE/PAWEL SUPERNAK]

While the new restrictions will come into force on Saturday, Polish authorities are hesitating to enforce a ban on gatherings eyeing the country’s Independence Day march on 11 November.

Following the Constitutional Tribunal’s decision to ban most abortions in October, mass protests have erupted across Polish cities but the state and state security services have not taken tougher measures against protesters.

This could be because 11 November will mark Poland’s Independence Day, the day on which the annual Independence March takes place.

For years, Independence Marches have been a show of nationalist, radically conservative emotions expressed in a chanted “God, Honour, Fatherland” slogan, with march leaders protesting against same-sex liberties, globalism, and abortion.

This year the march’s slogan is “Our Civilization. Our Rules”.

The poster designed by Wojciech Korkuć, the artist who has, for example, designed President Andrzej Duda’s electoral poster for this year, but also other posters aligned with the radical right narrative in Poland, including calls for war reparations from Germany and praising the judicial reforms undertaken by the governing PiS.

It also shows a geometrised hussar with a within the colours of the Polish flag who smashes a star with his sword.

Part of the star is red in reference to either “radical leftism” attributed to non-nationalists, or to communism which some Polish critics associate with the EU. The other part of the star is rainbow-coloured, referring to the LGBTQI+ community.

Following the March, there could indeed be a real ban on gatherings.