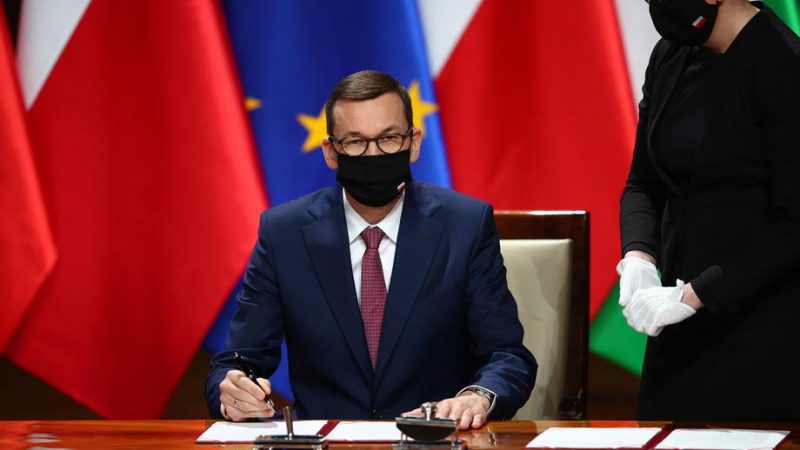 Prime Minister Mateusz Morawiecki will submit a request to the Constitutional Tribunal to comprehensively resolve the collision of EU law norms with the country’s Constitution and confirm existing case law in this regard, announced government spokesman Piotr Müller.

At Wednesday’s cabinet meeting, a discussion was held on the EU Court of Justice “overstepping its competences” by “stating the superiority of European law over the Constitution of the Republic of Poland”, the government spokesman said in a statement.

“In accordance with the established, long-standing jurisprudence of the Polish Constitutional Tribunal, there is no doubt whatsoever about the superiority of Polish constitutional norms over other legal norms. This has been confirmed by numerous decisions of the Constitutional Tribunal, in various formations, since the beginning of Poland’s membership in the European Union,” Müller said in the statement.

He also pointed out that legal disputes concerning the sovereignty of member states with regard to competencies not delegated to the European Union have occurred in many EU countries.

“However, they were unequivocally resolved and indicated the supremacy of constitutional norms over European law. Such unequivocal settlements were made, among others, by the competent courts or tribunals in countries such as Germany, France, Italy, Denmark, the Czech Republic, etc.” he stressed.

Earlier in the day, the leadership of Poland’s ruling Law and Justice party (PiS) asked the government to send a request to the Constitutional Court to respond to a recent ruling of the Luxembourg Court.

The Court, responding to questions from the Supreme Administrative Court of the Republic of Poland, ruled on Tuesday that “successive amendments to the Act on the National Council of the Judiciary, which have led to the abolition of effective judicial review of the Council’s decisions to submit proposals to the president for the appointment of candidates for Supreme Court judges, may breach EU law”.

According to the EU Court, if a national court considers that these amendments violate EU law, it is obliged to disapply these provisions. At issue are subsequent amendments to the Act on the NCJ, which modify, among other things, the possibility of appeals against NCJ resolutions on the appointment of Supreme Court judges.