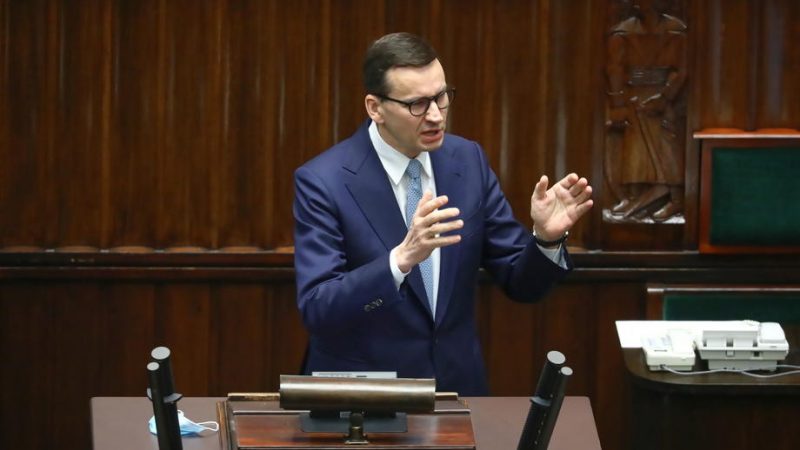 “It is known that inflation was caused by external factors, but we have to find the answer and bear the price,” said Morawiecki. [EPA-EFE/Tomasz Gzell]

In its long-awaited second “anti-inflation shield”, the government announced its plan to cut value-added tax on fuel and introduce a zero VAT rate on goods such as basic food products, fertilisers and natural gas.

The significant rise in food, fuel and gas prices has become one of the most prevalent topics in Polish public debate, said Prime Minister Mateusz Morawiecki as he announced the anti-inflation package. “Most Poles can’t sleep because of rising bills,” he told a news conference on Tuesday.

According to the opposition, the government bears the primary responsibility for high inflation rates.

“It is known that inflation was caused by external factors, but we have to find the answer and bear the price,” said Morawiecki.

The question is whether the European Commission will accept Poland’s tax reduction plan.

The Commission approved by way of exception the introduction of a zero VAT tax rate on food so that Poland will not have to wait until the so-called VAT directive comes into force later this year, Polish media reported last month.

The matter is slightly more complicated with gas. Media say the EU executive will probably reject the idea.

“It is inconsistent with the VAT directive, which allows a minimum 5% tax rate for natural gas,” a European Commission source told Polsat News. Plans to reduce the tax rate for fuel will probably face opposition for a similar reason, TVN, another TV station, has reported.

Should Poland ignore the EU’s objections, the Commission will launch an infringement procedure. If the government’s explanation proves unsatisfying, “the Commission may refer the matter to the EU Court of Justice, demanding changing provisions that are incompatible with EU tax law and violate the competition on the single market,” explains TVN.