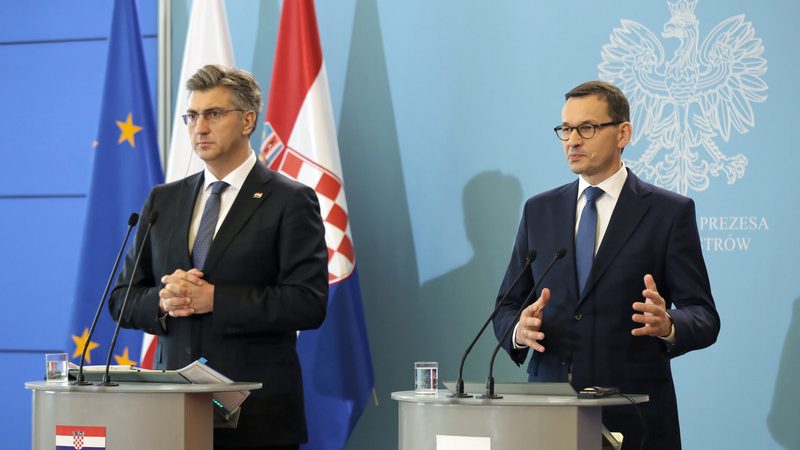 The Croatian government was informed about Morawiecki’s visit just an hour and a half before his arrival. There was no explanation for the urgency of the visit, but interestingly it took place a day before the visit of French President Emmanuel Macron.

“Russia is putting pressure on Poland and the entire EU through the Nord Stream 2 gas pipeline. One part of the EU is heavily dependent on Russian energy, and if Nord Stream 2 starts operating, we can conclude that it will be even more dependent,” Morawiecki said.

Russia uses gas as a “political bargain chip”, he added.

The United States on 22 November imposed further sanctions in connection with the Nord Stream 2 gas pipeline, Secretary of State Antony Blinken said in a statement, targeting Russia-linked Transadria Ltd. and its vessel.

The Kremlin reacted, saying the sanctions were “illegal and wrong”, especially when Moscow and Washington are attempting to rebuild dialogue.

In his sudden visit to Zagreb, Morawiecki spoke of the migration crisis Poland is currently facing at its border with Belarus. Morawiecki believes that the “artificially provoked migrant crisis”, the accumulation of the Russian army around the border with Ukraine and along the border in the Kaliningrad region, and the energy crisis partly caused by Russia’s manipulation of gas prices, are all forms of Russian political pressure on the EU.

Morawiecki said regimes like Belarus, which encourage “destabilisation beyond their borders”, are responsible for the “rise of various destabilisation processes” in the Balkans.

The Croatian PM agreed that Poland faces an orchestrated attempt to be destabilised, adding that Croatia sometimes faces a similar problem.

That is why Croatia knows “how important and substantial” it is to guard the borders of Poland and Croatia, which contributes to “the security of our citizens and respect for European and international norms,” the Croatian PM said.