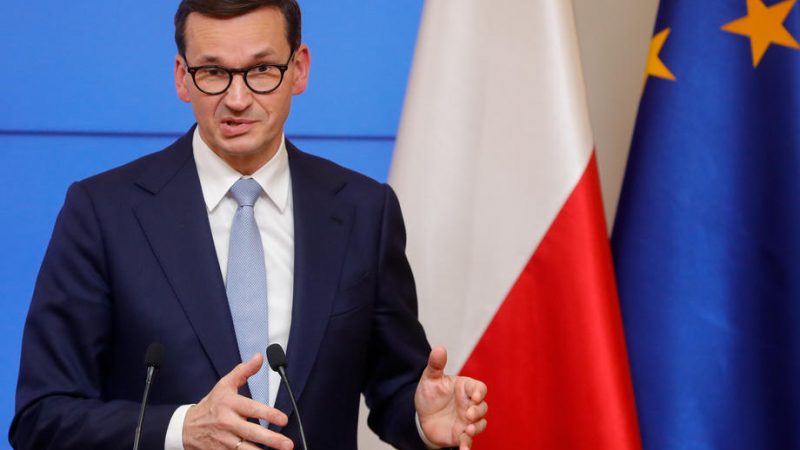 The Commission risked “starting the third world war” should it choose not to greenlight the Polish recovery plan, the Polish PM said. [EPA-EFE / STEPHANIE LECOCQ]

In an interview for the Financial Times, Polish Prime Minister Mateusz Morawiecki accused the European Commission of holding “a gun to our head” over negotiations related to funds for Poland’s recovery programme and rule of law conditionality.

The Polish PM said that the Commission risked “starting the third world war” should it choose not to greenlight the Polish recovery plan.

“This money should have already been paid. This is a breach of procedure by the Commission,” Morawiecki added. “They are in breach of the rule of law”.

He also threatened to use “retaliation”, potentially including opposition to EU climate change policy.

In the interview, he demanded that the Commission retract the demand for daily fines paid by Warsaw for not implementing the Court of Justice July decision on the invalidity of the Polish Supreme Court’s Disciplinary Chamber.

“We will get this money sooner or later,” he said, warning that “the later we get it, the stronger the proof that there is this discrimination treatment and diktat type of approach from the European Commission.”

“He wants to please Jarosław Kaczyński and save himself from being forced to resign”, said Halicki, whose party opposes the ruling Law and Justice party.

“Morawiecki wants to show he is ‘harder’ than [justice minister] Ziobro or [former prime minister] Szydło”, and the price for reaching this objective is… “the Polish national interests,” Halicki concluded.