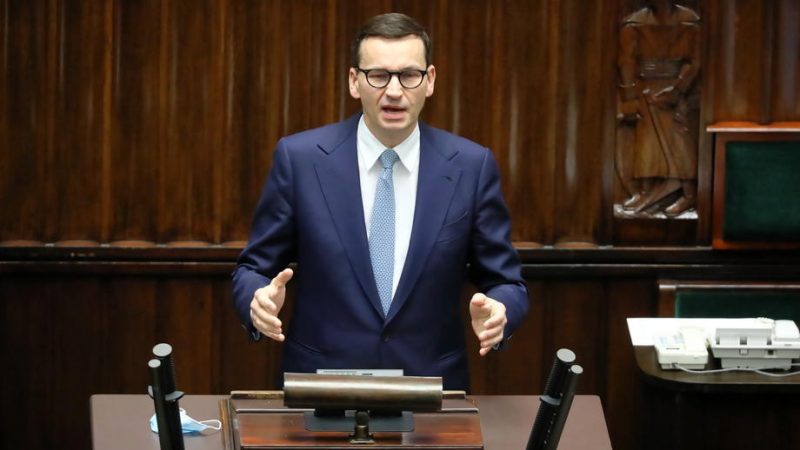 Announcing the “#StopRussiaNow” campaign on Saturday (23 April), Morawiecki said it is addressed mainly at Western European politicians, whom he accuses of wanting to return too quickly to good relations with the Kremlin. [EPA-EFE/Tomasz Gzell]

Announcing the “#StopRussiaNow” campaign on Saturday (23 April), Morawiecki said it is addressed mainly at Western European politicians, whom he accuses of wanting to return too quickly to good relations with the Kremlin.

“[Russian President] Vladimir Putin has prepared a special operation including war crimes and genocide. What is happening in the Ukrainian streets shocked us, but only for a short time,” he argued, adding that he wants the campaign to become “a scream of those who have been brutally murdered in cities, towns and villages [of Ukraine].”

According to Morawiecki, the first billboard cars have already set off to the biggest Western European cities. Most of the banners, the photographs of which the prime minister posted on his Twitter account, are based on the comparison between the Western European middle and higher class standard of living and the results of the Russian invasion of Ukraine.

For instance, one of the posters showed a picture of a middle-aged man sitting on a hospital bed in white, clean clothing and looking content, and a picture of a devastated hospital in the Luhansk Oblast. “Are you happy with your healthcare? #StopRussiaNow,” the billboard reads.

The prime minister also said he would visit key Western European capitals to convince other state leaders to increase economic sanctions against Russia. “Germany, France, Austria, Italy – these countries have to do their best to stop the war in Ukraine by suspending financing Putin’s war machine,” he appealed.

According to Morawiecki, the sanctions already in place are “insufficient.”

“Look at the rouble rate, on the condition of the Russian economy,” he said, pointing out that the sanctions will hit Moscow, but only “in the long run,” whereas Ukraine needs help “here and now”.