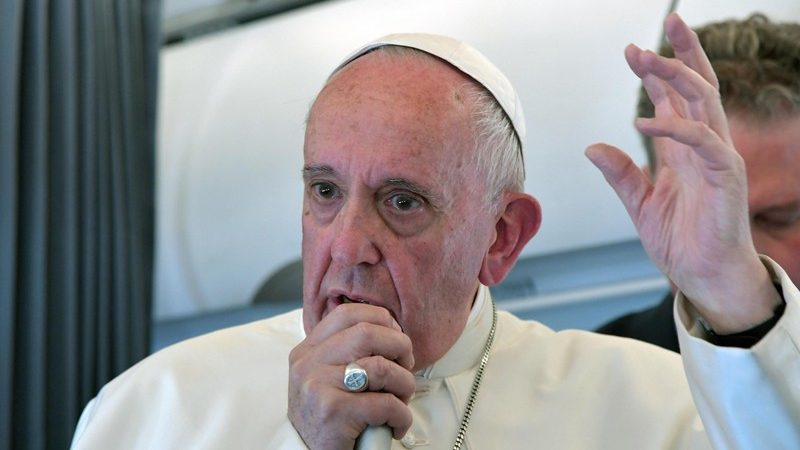 In an interview with Italian daily Corriere Della Sera published on Tuesday (3 May), Pope Francis said the Hungarian prime minister had told him during an audience that “the Russians have a plan, and that everything will end on 9 May”, which seems to suggest Orbán might have some insight into Russia’s planning. [EPA/ TIZIANA FABI]

Pope Francis wrapped up his official visit to Slovakia on Wednesday by celebrating holy mass in the western Slovak pilgrimage town of Šaštín-Stráže in front of approximately 50.000 people.

Before the Pontiff departed for Rome on Wednesday afternoon, he once again privately met with Slovak President Zuzana Čaputová for their third private meeting in four days.

On Tuesday, Pope Francis travelled to the cities of Prešov and Košice in the east of the country. In Košice, he visited Lunik IX, a Roma settlement in the suburbs of the eastern Slovak metropolis. The neighbourhood has the highest density of Roma people in the country, who often live in overcrowded tenement buildings. It is also known as a place where basic services such as gas, running water, sewage system, electricity and heating are scarce..

The Pope called for integration of Roma people into the Slovak society and condemned discrimination and prejudice against them.

“It is not easy to value others, especially if we see them as problems or enemies; if we pass judgement without making any effort to get to know them and to listen to their stories,” said the Pope as quoted by the Vatican News media outlet.

Francis said Roma population has too often been the object of prejudice, harsh judgements, stereotyping and defamatory words and gestures. “Restoring dignity means passing from prejudice to dialogue, from introspection to integration,” he added.