Pope visits refugee camp in Lesbos for the second time 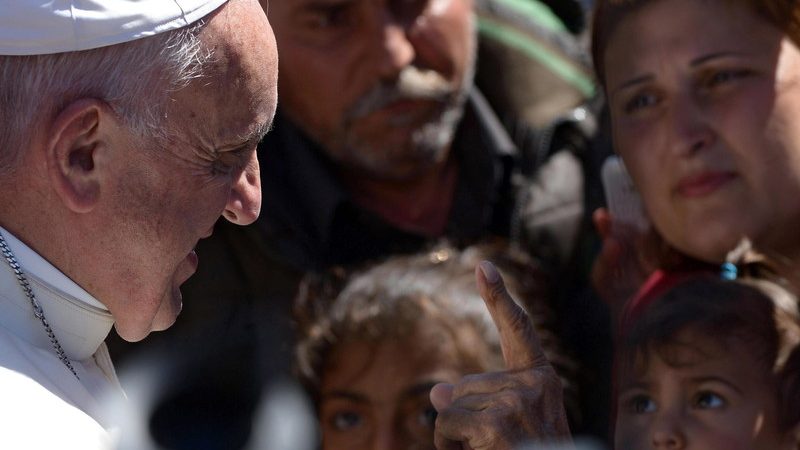 In 2016, the Pope thanked the Greek people who “responded with great generosity to the needs of the refugees, despite the fact that they are going through a difficult period”. [EPA/FILIPPO MONTEFORTE]

In 2016, the Pope thanked the Greek people who “responded with great generosity to the needs of the refugees, despite the fact that they are going through a difficult period”. His meeting with the Ecumenical Patriarch of the Orthodox Church Bartholomew and Archbishop Ieronymos of Athens was branded the “meeting of the three Hierarchs”.

Greece has recently been accused of illegal pushbacks of migrants and refugees. In a recent confrontation with Dutch journalist Ingeborg Beugel and a subsequent interview, Kiriakos Mitsotakis defended intercepting boats carrying migrants and blamed Turkey for weaponising migrants, violating the EU-Turkey agreement.

In a recorded video message released on Saturday, the Pope expressed his joy over his upcoming visit to Greece. His visit “in the name of the Gospel” will follow the footsteps of the first great missionaries, the Apostles Paul and Barnabas, the Vatican said in a press release.

In his message, Pope Francis stressed that the refugees crossing the sea are “our brothers and sisters”, noting that so many have lost their lives at sea that the Mediterranean has become a “great cemetery”. The Pope said he was “convinced that the sources of common life will only flourish again in fraternity and integration: together”.

The mare nostrum, “this sea, which embraces so many peoples and great civilizations, with its open ports, reminds us that the sources of our coexistence lie in mutual welcome. I already feel your affectionate welcome, and I thank those who have been preparing this visit for a long time,” the Pope said in his message.

“I also think of those who in recent years, and even now, leave behind wars and poverty and arrive at the shores of our continent and elsewhere, but find no hospitality, but hostility, and are instrumentalised. They are our brothers and sisters. Many have lost their lives at sea.”

In the last 25 years, 34,361 people have died attempting the dangerous journey, according to numbers published by the United for Intercultural Action, a group of 550 anti-racism organisations in 48 countries.