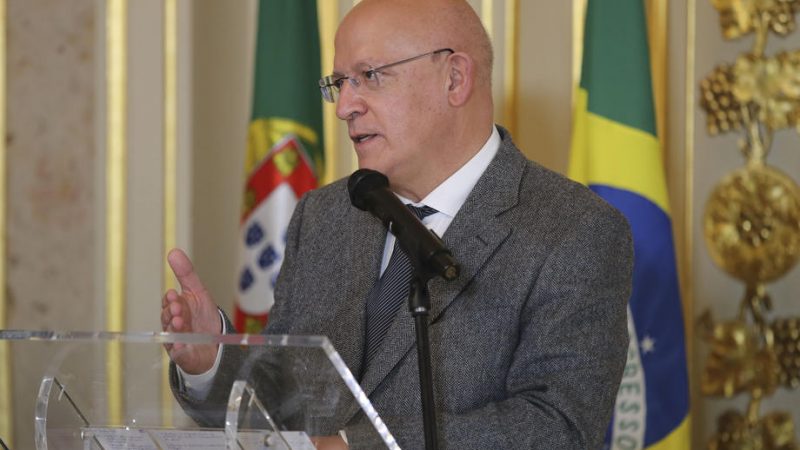 “We cherish Ukraine’s European aspirations and have advocated the strengthening of cooperation within the framework of the existing Association Agreement and the prompt, careful examination, by the European institutions, of the application submitted by Ukraine,” the speaker stressed. [EPA-EFE/MANUEL DE ALMEIDA]

Portugal values Ukraine’s European aspirations and will not hinder processes to support this country in any way, parliament Speaker Augusto Santos Silva said on Thursday.

Santos Silva transmitted this reference in the speech that closed the session of parliament with Ukrainian President Volodymyr Zelenskyy, who participated via videoconference.

Santos Silva stressed that Portugal, as an EU and NATO member state, “always strives to preserve unity, which is essential for practical decisions, and never hinders, but instead favours the decision-making processes underway that increasingly support their country.”

“We cherish Ukraine’s European aspirations and have advocated the strengthening of cooperation within the framework of the existing Association Agreement and the prompt, careful examination, by the European institutions, of the application submitted by Ukraine,” the speaker stressed.

Santos Silva stressed that Ukraine’s request for EU accession “will be carefully examined” by the Portuguese prime minister.

In his speech, Santos Silva began by stating that “Portugal has condemned the Russian Federation’s military aggression against Ukraine” from the start.

He went on to say that Portugal “did not limit itself to condemning the aggressor and showing solidarity with the victim” and “matched its actions with its words.”

The speaker noted, “at the same time, the prime minister declared that Portugal would welcome all Ukrainian citizens in need of humanitarian protection, without any restrictions,” and noted that more than 31,000 Ukrainians had been received in Portugal, with 2,500 Ukrainian children attending schools in the country.

“We are not naïve: to return to the peace that allows and stimulates the development of cultural ties, we need to win the peace. And to win peace, we need to stand up to aggression and force the aggressor to stop aggression by engaging in a serious negotiation process leading to peace,” the parliament speaker added.

Also speaking on behalf of Marcelo Rebelo de Sousa and António Costa, the speaker gave Zelenskyy the following message: “Your country’s struggle for freedom is the struggle of all Europe for freedom.”

“And in that fight for freedom, democratic Portugal has never failed, does not fail and will not fail,” he added in a speech that was given a standing ovation.