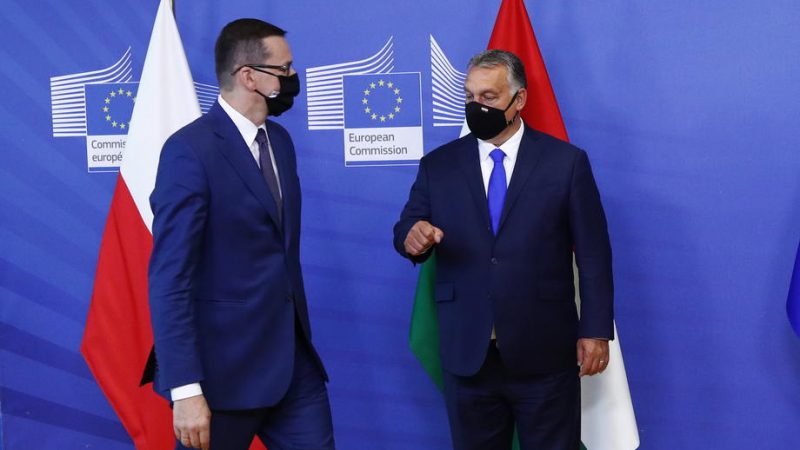 It seems Budapest and Warsaw will remain firm in their position, which is also openly backed by Slovenia. [EPA/FRANCOIS LENOIR]

The French and German Ambassadors to Warsaw, Frédéric Billet and Arndt Freytag von Loringhoven, called on EU countries to show solidarity during the COVID-19 pandemic in a joint message to the Polish government published Monday by “Rzeczpospolita” daily. The message also made a reference to the new EU budget, which Poland and Hungary have blocked.

Both countries have been under EU investigation for undermining the independence of courts, media and non-governmental organisations. With the recovery fund conditions in place, the two risk losing access to funding over rule of law shortcomings.

Last week, EU leaders agreed in a virtual summit to allow more time for an agreement.

Polish PM Mateusz Morawiecki will meet his Hungarian counterpart Viktor Orbán in Budapest on Thursday to discuss their veto of the EU’s budget and recovery fund, a Polish government spokesman has said.

It seems Budapest and Warsaw will remain firm in their position, which is also openly backed by Slovenia.

“Only together will we manage to overcome the pandemic and its consequences”, the French and German ambassadors said in a joint message.

They emphasised the role of EU member states in helping each other, particularly when it comes to providing medical equipment and receiving patients from other countries.

EURACTIV Poland commented that this was a clear reference to the fact that Poland rejected Germany’s offer to send ventilators last week.

Billet and Freytag von Loringhoven also praised the European Parliament and the Council’s compromise on the EU budget and the “Next Generation EU” fund.

However, the ambassadors made it clear that “EU funds have to be spent as intended and with respect to the rule of law”. Conditionality “will serve the protection of the EU budget, so it is beneficial for all EU member states,” they added.

Morawiecki and Orbán will meet in Budapest on Thursday to discuss their veto of the EU’s budget and recovery fund, a Polish government spokesman has said.

“We say a loud ‘yes’ to the European Union and a loud ‘no’ to the reproachful mechanism,” Morawiecki said in a statement on Monday.

“We are in favour of adhering to European treaties. But it has to be said clearly that nobody will force us to implement other people’s visions”, he added.

Meanwhile, Slovenia’s FM Anže Logar has said that traditional democracies have a different view of the rule of law than countries that emerged from repressive systems only 30 years ago.

“The debate erupted during the crisis. We have to come to terms with looking at the matter from different angles,” he told a Berlin Conference organised by the Körber-Stiftung.