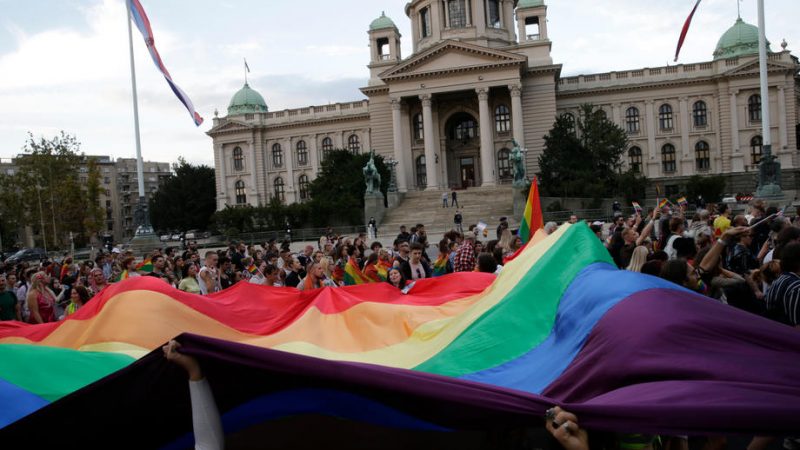 Organisation committee member Marko Mihailović said LGBTI+ people were citizens of Serbia and deserved laws and rights like everyone else. [EPA-EFE/ ANDREJ CUKIC]

As the Belgrade Pride march was taking place on Saturday, several hundred people assembled at an anti-globalist rally in downtown Belgrade, marching through the streets and chanting insults against Serbian President Aleksandar Vučić and Prime Minister Ana Brnabić in front of the Serbian Presidency building.

The Pride march began with a call from the “godmother” of the event, singer Nataša Bekvalac, who addressed participants from a sound truck, and displayed a large rainbow flag and banner reading “Love Is the Law” at the head of the march. The parade was for everyone who believed in freedom, equality and love, said Bekvalac.

Organisation committee member Marko Mihailović said LGBTI+ people were citizens of Serbia and deserved laws and rights like everyone else.

“[The participants of] this year’s Pride demanded a law on same-sex unions. We want this to be the last Pride that we don’t have this law,” he said, adding that LGBTI+ people were not “wrong or the problem, but a symbol of freedom, he added.

Meanwhile, other protesters took the street to protest current COVID-19 measures, particularly the introduction of COVID passes. The organisation Doctors and Parents for Science and Ethics, which launched a petition titled “Stop to Forced Vaccination and Discrimination of Children by Experimental COVID-19 Vaccines,” also responded to the call for the protest.

The rally also drew sympathisers of the conservative Dveri (Doors) Movement, whose leader Boško Obradović said the COVID Crisis Headquarters had lost all trust from doctors and the public have only, in Obradovic’s opinion, brought contradictory decisions which the members did not follow.

“We are here today for the purpose of prevention, to send a message that this kind of dictatorship and violation of the Constitution, human rights and freedoms will not fly. People are rising up across the world. Of course, we here in Serbia had to raise our voice,” Obradović declared.

In the evening, several dozen ultraconservative antiglobalists, led by a former Serbian orthodox monk, gathered near the place where the Pride participants were holding their party, singing religious chants and pelting police officers and journalists with eggs. Police prevented any contact, however.