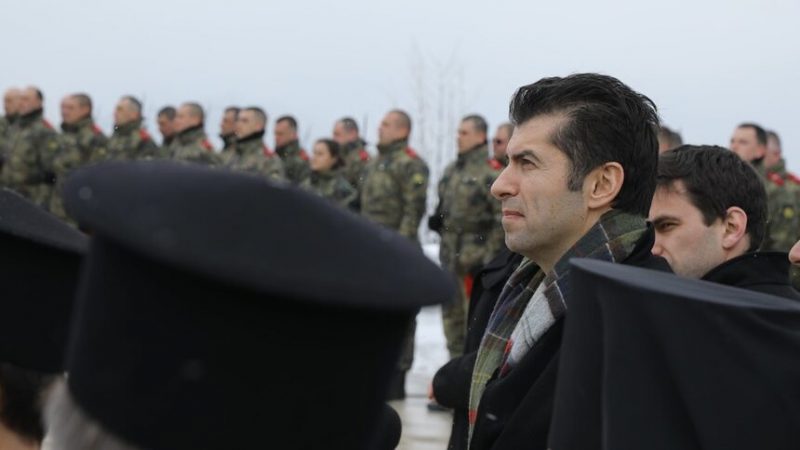 Petkov at Shipka Peak on the National Day celebrations on 3 March 2022. [Press service of the Bulgarian government]

Supporters of the far-right pro-Russian Vazrazhdane party silenced the official ceremony celebrating Bulgaria’s national holiday on Shipka Peak by chanting “Russia”, “resignation” and “NATO out” as they waved Russian flags. As Prime Minister Kiril Petkov spoke during the ceremony, members of Vazrazhdane shouted “traitor” and aimed snowballs at him.

Petkov and the Speaker of the National Assembly Nikola Minchev took part in the celebration of the 144th anniversary of the Liberation of Bulgaria. The Russo-Turkish War of 1877-78 was a liberation for the country which had been under Ottoman rule for five centuries before that.

Just before the arrival of Petkov and Minchev a man took the European flag from the pedestal and replaced it with a Russian one. The police intervened and removed him.

“The Russo-Turkish Liberation War still resonates today. Many of my compatriots perceive the events in Ukraine, as 144 years ago, as just and long-overdue actions to protect the people of Donbas from the Nazi Kyiv regime, which has been indiscriminately killing civilians for eight years,” Mitrofanova said.

The day before, two Russian diplomats in Sofia were declared persona non grata and given 48 hours to leave Bulgaria due to further revelations by the prosecutor’s office about espionage.

Ambassador Mitrofanova refused to appear at the foreign ministry to receive the note for the diplomats as well as another urging Moscow to stop non-diplomatic language against Bulgaria that it has been using on social media. The ambassador sent her deputy to collect the notes and the posts still appear on the embassy’s Facebook page.