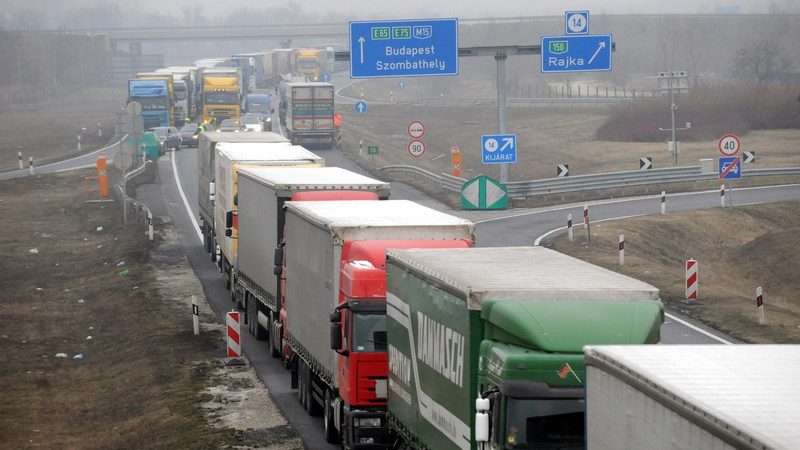 Tens of truck drivers partially blocked main entry to Bratislava on Monday, in a protest against high energy prices and lack of action from the government. [EPA/KAROLY GYOERI]

Tens of truck drivers partially blocked main entry to Bratislava on Monday, in a protest against high energy prices and lack of action from the government. The protest was backed by the leader of the far-right People’s Party Our Slovakia Marian Kotleba, who called it a “freedom convoy”. Organisers, however, distanced themselves from Kotleba.

“All those who support the Canadian convoy and the courageous struggle for freedom. Now you have an opportunity to show that you are more than just a Facebook warrior. Each of you can support the Slovak in his own way. Nevertheless, let’s do something!” Kotleba wrote.

But those behind the event were quick to remove themselves from the comments.

The protest was organised by the Union of Slovak truck carriers (UNAS). According to the organisers, it was meant to address the lack of measures against high energy prices and inflation. As an example of governmental response, UNAS mentioned Poland and Hungary, where governments actively tackled the crisis.

As EURACTIV previously reported, Warsaw decided to lower VAT for energy commodities and Hungary regulated fuel prices. As a result, many Slovaks travel to neighbouring countries to fill their tanks.

Slovak truck drivers are now saying that these measures make them uncompetitive and demand the government lower tax for energy commodities by 30%. UNAS called on the government to meet with them. If that does not happen, they said blockades will continue.