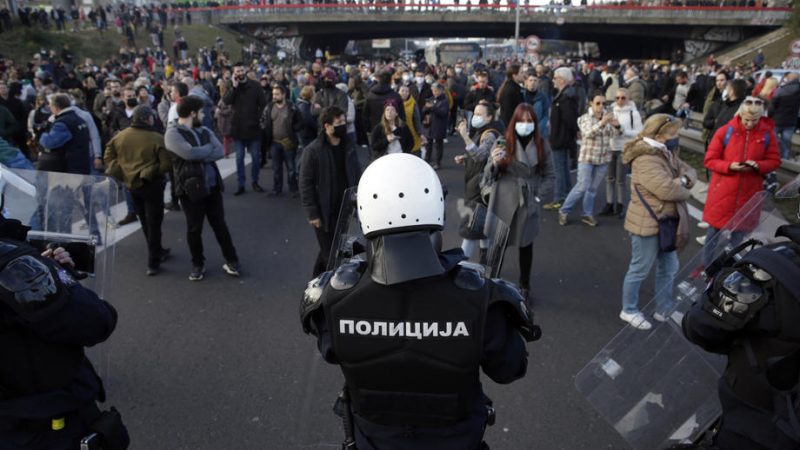 Environmental activists say the law was designed to advance mining projects that damage the environment, such as the Rio Tinto lithium extraction project in central Serbia, or the Chinese Zijin copper mines. [EPA-EFE/ANDREJ CUKIC]

Several protests took place in Belgrade on Sunday, a day after mass protests and traffic blockades across the country over recently adopted laws on referendum and expropriation of property.

On Sunday, thousands of people gathered in Belgrade for an environmental protest, urging the government to change its attitude towards environmental problems and start applying the law against the biggest polluters.

On Saturday, thousands of environmental activists and citizens halted traffic for one hour in several Serbian cities in protest against legislation on referendums and expropriation. The expropriation law allows the seizure of private property if the government decides that it is in the public interest and needed for important projects.

Environmental activists say the law was designed to advance mining projects that damage the environment, such as the Rio Tinto lithium extraction project in central Serbia or the Chinese Zijin copper mines.

Belgraders blocked the main bridge over the Sava river, while in Novi Sad, protesters stopped traffic on the Varadin Bridge. The major high-speed motorway Ibarska Magistrala was also blocked.

Police forces were deployed, and there were clashes between police and protesters in Belgrade, and several arrests made.

The most serious incident occurred in Sabac, where unknown individuals tried to drive through protestors blocking the road with a bulldozer. Protestors attacked the driver but were driven away by masked individuals carrying bats and hammers. According to reports from the scene, this happened after the police withdrew from the scene.

The latest waves of protest come after weeks of tensions caused by graffiti and murals supporting convicted war criminal Ratko Mladic. Police detained a number of activists, and international observers criticised the government for their treatment of the public and failure to remove the graffiti.