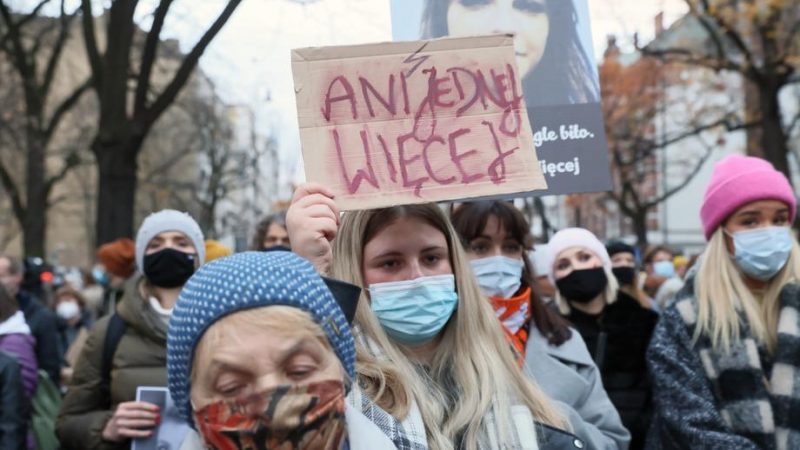 eople take part in a protest under the slogan 'Not one more' in Warsaw, Poland. [EPA-EFE/LESZEK SZYMANSKI]

Hundreds of people gathered on Wednesday evening at the Constitutional Tribunal and the headquarters of the ruling Law and Justice (PiS) party to protest against the Tribunal’s 2020 anti-abortion ruling after another woman died due to the doctors’ refusal to perform an abortion on time.

The woman, identified as Agnieszka T, was in the first trimester of a twin pregnancy when she was admitted to the Blessed Virgin Mary hospital in Częstochowa due to pregnancy complications.

The first foetus died in the womb on 23 December, but doctors refused to remove it, quoting the current abortion legislation. The health personnel waited until the heartbeat of the second foetus also stopped a week later and then waited another two days before terminating the pregnancy.

Agnieszka’s health had been deteriorating until she died on Tuesday and her family believes her death was a result of a septic shock. Referring to the Constitutional Tribunal’s ruling, the woman’s relatives accused the government of having “blood on their hands”.

Agnieszka’s death follows Izabela last September, who died after being denied medical intervention when her waters broke in the 22nd week of her pregnancy. As her family stated, she was denied an abortion due to the country’s abortion laws. An investigation of the issue found “medical malpractice” and the hospital was later fined.

Izabela’s death was a subject of Wednesday’s joint sitting of parliamentary committees of justice and human rights and of health. The opposition demanded “changes in the law that would protect women from death and release doctors of the inhuman law.”

Abortion where prenatal tests indicate a high probability of severe and irreversible impairment of the foetus or an incurable, life-threatening disease is no longer allowed.

The decision led to mass protests in Warsaw and other Polish cities and towns.