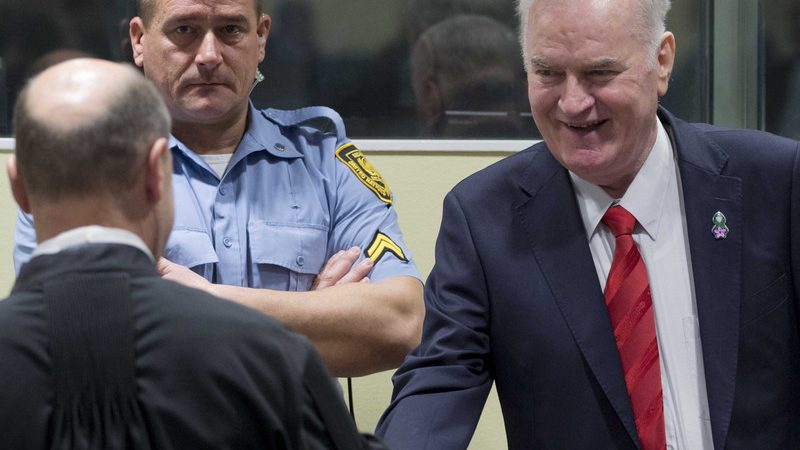 The mechanism for criminal courts in The Hague announced that the pronouncement of the final verdict is scheduled for 8 June. [EPA-EFE/PETER DEJONG]

The defence of the former commander of the Republic of Srpska Army, Ratko Mladić, nicknamed the “butcher of Bosnia”, who has been convicted of war crimes, requested that the final verdict be postponed until both defence attorneys and client could be present in person in the courtroom, as defence lawyer Dragan Ivetić is being treated in hospital.

“Under these unforeseen, unfortunate and extreme circumstances […] Ratko Mladić’s defence respectfully requests the Appeals Chamber to stop the sentencing hearing and adjourn until both defence counsel could attend the trial in person with the client,” defence counsel Branko Lukić said in a statement.

The mechanism for criminal courts in The Hague announced that the pronouncement of the final verdict is scheduled for 8 June.

“Immediately after setting the date of the verdict, Ratko Mladić said that he opposes any type of video link and insists that he be present in person in the courtroom, accompanied by both his defence attorneys Branko Lukić and Dragan Ivetić,” the request reads.

Mladić has been sentenced to life imprisonment after being convicted of genocide, war crimes and crimes against humanity in 2017. (Željko Trkanjec | EURACTIV.hr)