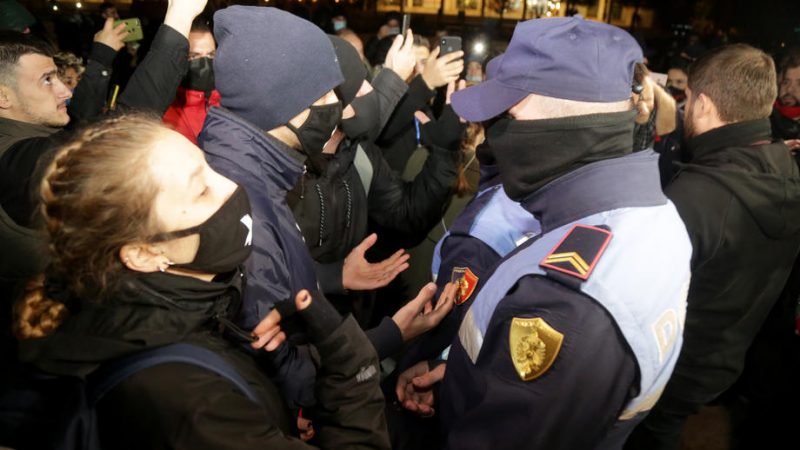 On Saturday, a conflict took place at the Democratic Party headquarters in Tirana as supporters of party founder and ex-prime minister and president Sali Berisha stormed the building, which had been barricaded by followers of Chairman Lulzim Basha. Protestors used a metal battering ram, crowbars, and sledgehammers to break down the door, as well as ground and first-floor windows.

After one hour, the police and special forces arrived and dispersed the crowd in moments with tear gas and water cannons. Several journalists were targeted, including camera operators who were directly hit by water jets.

Other journalists suffered issues with breathing and eyesight from the gas.

Reporters Without Borders called for sanctions for those responsible for police violence against journalists.

Albanian authorities have been repeatedly called out over the indiscriminate use of these methods during protests, to the detriment of media workers, whose job it is to be there.

In 2019, at opposition-led anti-government protests, many journalists were targeted with tear gas and water cannons over the course of several weeks of demonstrations. Some were hospitalised, and others reported police assault with batons. The authorities refused to cooperate with journalists who demanded to know what chemicals were being used against them due to fears of prolonged exposure.

Then in 2020, during the demolition of the National Theatre, police assaulted and detained multiple journalists while they were covering the protests. Officers had no name badges or numbers, meaning they could not be identified or have complaints filed against them.

Later that year, following the murder of an unarmed young man, Klodian Rasha, by an on-duty police officer, large protests erupted around the country and in the capital of Tirana. As well as allegedly assaulting and detaining tens of minors, there were multiple reports of assault and detention of journalists, including allegedly getting them to sign false confessions to be released.

Just two days before Saturday’s protest, special forces in Shkodra assaulted a journalist who attempted to film an operation taking place in public, despite identifying himself as a journalist.

These incidents form a part of a long list of physical attacks on Albanian journalists that have taken place over the last years. You can see documented incidents from 2019, 2020 and 2021 here.