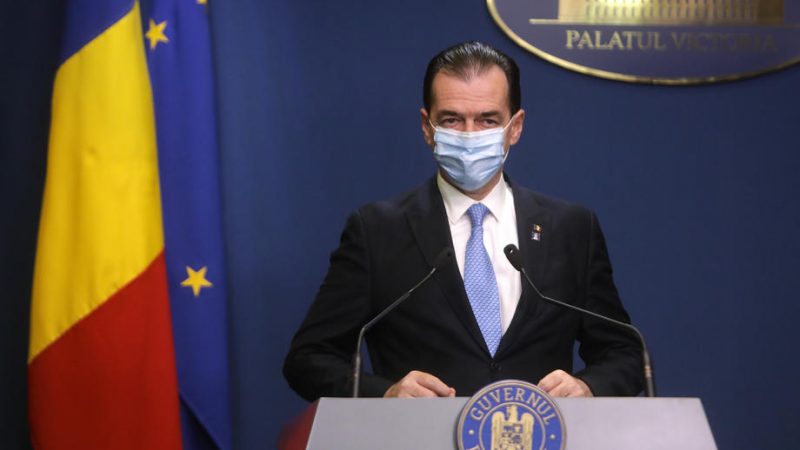 However, Orban is still PNL president (a member of PPE), and aims to be involved in talks on forming a new government coalition. [EPA-EFE/ADRIAN PACLISAN / ROMANIAN GOVERNMENT]

The now former Romanian Prime Minister Ludovic Orban resigned Monday from his position, after the results of general elections showed his party, the centre-right PNL, coming second to the social-democrats.

However, Orban is still PNL president (a member of PPE), and aims to be involved in talks on forming a new government coalition.

Orban resigned after a discussion with Romanian President Klaus Iohannis, who announced a centre-right coalition is likely to be formed quickly. However, despite getting the highest score in the Sunday elections, PSD will likely miss the opportunity to form the government.

“Romania needs a responsible government, a government that respects the people’s will to develop and modernise Romania,” Orban said, adding that he did not want to cling to power.

Orban’s objective for the coming days is forming a centre-right coalition that will exclude PSD, he added.

For his part, PSD leader Marcel Ciolacu criticised Orban’s decision, saying the former prime minister is being irresponsible for allowing there to be a government without full powers during a sanitary crisis. This comes after the PSD and its leader had repeatedly criticised the PNL government over the past months, asking for Orban’s resignation for his handling of the COVID-19 pandemic.

Until a new government is formed, the current executive will continue on an interim basis and with reduced powers following Orban’s resignation. President Iohannis named current Defence Minister Nicolae Ciuca to act as interim PM.

According to the election’s partial results, PSD has so far obtained almost 30% of the votes in Sunday’s parliamentary election, while PNL came second with around 25% of the votes.

Meanwhile, USR-PLUS (Renew Europe) currently has more than 15%, and will likely form the new government together with PNL and the other PPE member parties in Romania.

UDMR, the party that represents the Hungarian minority, is now at 6.4% of the votes, but PMP (the party of former president Traian Basescu, who is currently an MEP) is very close to the electoral threshold of 5%.

The election’s big surprise was nationalist party AUR obtaining more than 8% of the votes, despite leaders saying they would not be part of any governing coalition. AUR members have in the past made racist statements and taken anti-gay stances. They have also opposed the mandatory use of facial masks, as well as the limits on religious processions.