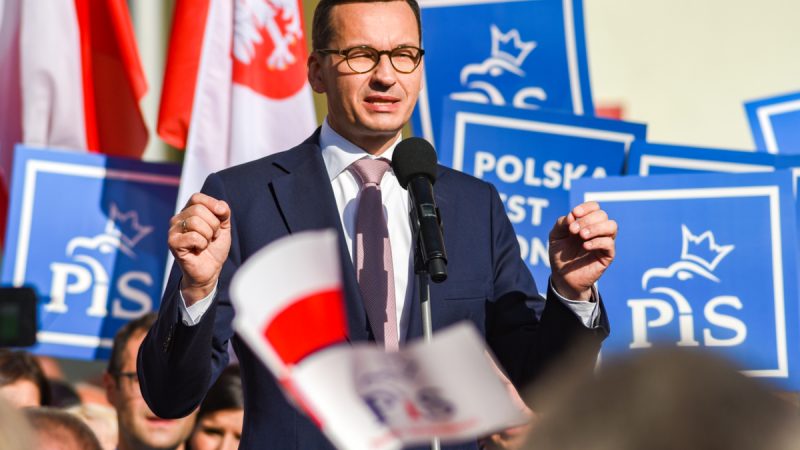 Support for the ruling Law and Justice dropped to 30%, according to several opinion polls published over the last few days. [Shutterstock / Kamila Koziol]

Support for the ruling Law and Justice dropped to 30%, according to several opinion polls published over the last few days. The support of the democratic opposition remains steady at over 40%, often close to 50%, while the far-right Confederacy is polling below 10%.

According to Jacek Kucharczyk, a leading sociologist and president of the Institute of Public Affairs (ISP) in Warsaw, the key question is about the organisation of the opposition ahead of the next elections.

“The opinion polls correctly reflect the outflow of support for the ruling party”, he told EURACTIV. “There is a massive anti-PiS electorate in Poland that needs to be well taken care of in order to get a positive result”. Kucharczyk alludes to the recent elections in which most opposition parties were divided, allowing PiS to win.

United in one bloc or divided into multiple blocs, the Polish opposition has not taken a decision yet. “The opposition parties are jealous of one another”, says Kucharczyk, who argues they should join forces.

On paper, it seems that the closest allies are the Civic Coalition led by Donald Tusk (Civic Platform, PO, is an EPP member with smaller liberal and green parties) and Poland 2050 of Szymon Hołownia, who just recruited a former EPP MEP Róża Thun to switch to Renew in the European Parliament. Together the two enjoy 35-40%.

According to Kucharczyk, however, Tusk and Hołownia’s parties are not as compatible with the Civic Coalition’s urban electorate and the Left (S&D, about 7-9%). “The Left recruits its voters from the PO, and this is fratricidal to both parties. We saw this in 2020 during the presidential elections. The Left’s electorate abandoned the Left’s candidate [MEP Robert Biedroń] to beat PiS, but today they are more afraid to lose identity within the larger PO”.

At the same time, there is schizophrenia in the Civic Platform, too. As the PO leaders talk about “the conservative anchor”, “there is a coded reluctance to the Left among the PO leaders”, says Kucharczyk, “and they are lurking towards conservative electorate of Hołownia, attempting to lure Hołownia’s voters to the PO”.

All this rivalry does not contribute to trust between political parties. “PO could give up trying to get to voters Hołownia takes away from PiS”, says Kucharczyk.

“Today the PO, the Left and Hołownia’s Poland 2050 should go in one block together with PSL”. PSL is a smaller EPP party of agricultural origin, polling at 5%. “It did not work out in 2019, but the concept of a joint European-democratic front makes sense”, says the analyst.

Can PiS regain popularity with the voters? Kucharczyk is sceptical: “The crisis of support for PiS is deep and linked with the crisis of the state”. What can be used by the PiS government is the EU funds, part of which are currently blocked over the rule of law situation. “Don’t count your chickens before they hatch”, Kucharczyk warns the opposition.

The next elections are scheduled for 2023.