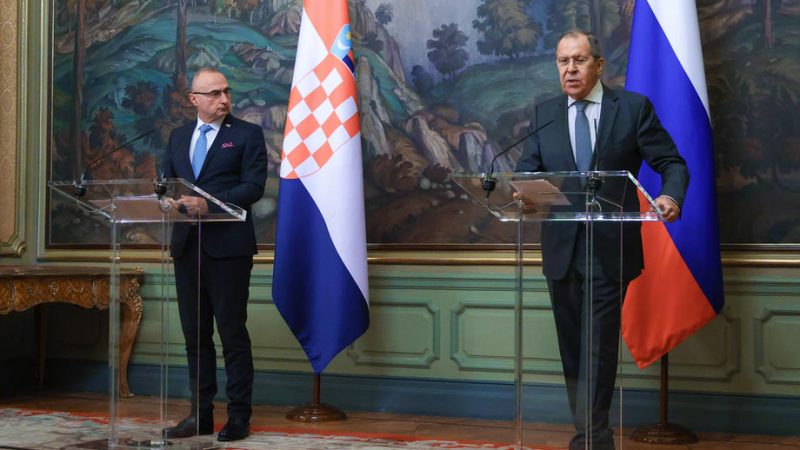 Russia sees Croatia as “a respected European partner” with which it has historical and cultural ties. Russian Foreign Minister Sergey Lavrov told a press conference after meeting with his Croatian counterpart, Gordan Grlić Radman, in Moscow.

When the visit was arranged, international circumstances were much more different, but this provided an opportunity to talk “quite openly” about the current geopolitical situation, the Croatian Minister said.

Croatia’s believes that a solution for the Ukraine crisis should be found as part of the Minsk agreements from 2014 and 2015. They envisage the full withdrawal of the Russian army from eastern Ukraine, greater autonomy for Donetsk and Luhansk, and restoring full Ukrainian control over the eastern border.

Recently in Kiyv, Croatian Prime Minister Andrej Plenković, who used to chair the European Parliament’s delegation for Ukraine, and Croatian diplomats openly supported Ukraine’s territorial integrity, offering to share Croatia’s experience in the peaceful reintegration of its Danube River Region in the 1990s.

Lavrov said Croatia and Ukraine had different interpretations of “the transfer of the experience in peaceful integration,” with Croatia “thinking about the humanitarian aspects, solving language problems, creating cultural autonomies” and Ukraine wanting to use “the military part of the process that went on.”

“Such intentions, which I hope won’t occur, are dangerous,” he said, adding that Ukrainian President Volodymyr Zelensky had said that “Ukrainians who consider themselves Russian can leave for Russia.”

“During our talks, we realised that Zagreb understands our rhetoric and remarks” about Kiyv’s aspiration to use the military elements of Croatia’s experience, Lavrov said, adding that for the Ukrainian issue “there is no plan B, only the Minsk agreement, which must be complied with to the last point.”