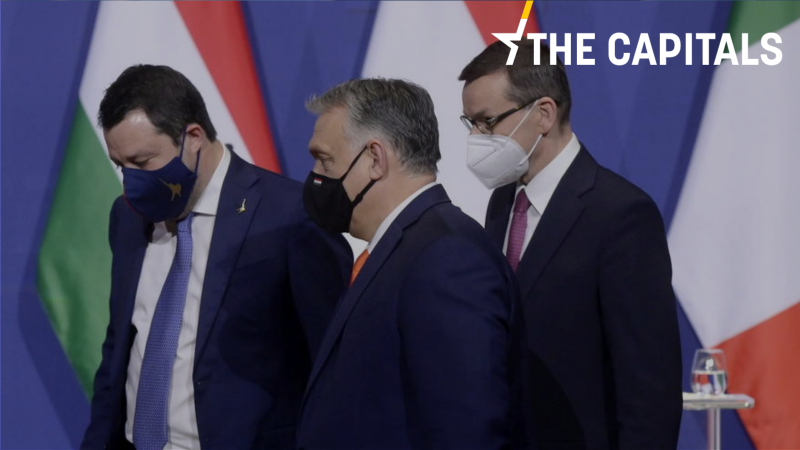 The time has come to bring together the best of these three groups and start playing a decisive role in the EU Parliament, Salvini declared Sunday in Cascais, Portugal, where he attended a conference of his ID group under the slogan "Project of another Europe". [EPA-EFE/SZILARD KOSZTICSAK]

“The time has come to bring together the best of these three groups and start playing a decisive role in the EU Parliament,” Salvini declared on Sunday in Cascais, Portugal, where he attended a conference of his ID group under the slogan “Project of Another Europe”.

The politician also said that immigration and family issues need to be resolved in the EU. “On some issues, there is a need for someone in Brussels to say no to the renting of wombs and the adoption [of children] by homosexuals”, said Salvini. “I hope that also in the EPP there are those who do not accept being subordinates of the left,” he added.

“Europe is not the European Union, it is not the euro. It is millions of Europeans”, said the right-wing leader, noting that “the media treat this as a meeting of extremists […] We can be the first party with at least 130 parliamentarians.”

Salvini has previously held talks with PiS and Orban, including most recently in April in Budapest, where PM Mateusz Morawiecki was also present.

Salvini proposed the next meeting be held in June in Poland or Italy.

Leaders of the ECR group’s largest political parties met in Warsaw on Friday. PiS leader Jaroslaw Kaczynski, the head of Fratelli d’Italia, Giorgia Meloni and the head of Spain’s VOX party, Santiago Abascal, discussed the current situation in the ECR group and the possibility of establishing a new political group in the EU Parliament.

“The aim of these talks is to bring the presence of a real large centre-right force in the European Parliament which will be able to put a dam to this extremely liberal, extremely politicised, full of double standards and violation of treaties, the current direction of EU development”, a politician from the PiS party who decided to remain anonymous told the Polish Press Agency. (Mateusz Kucharczyk | EURACTIV.pl)