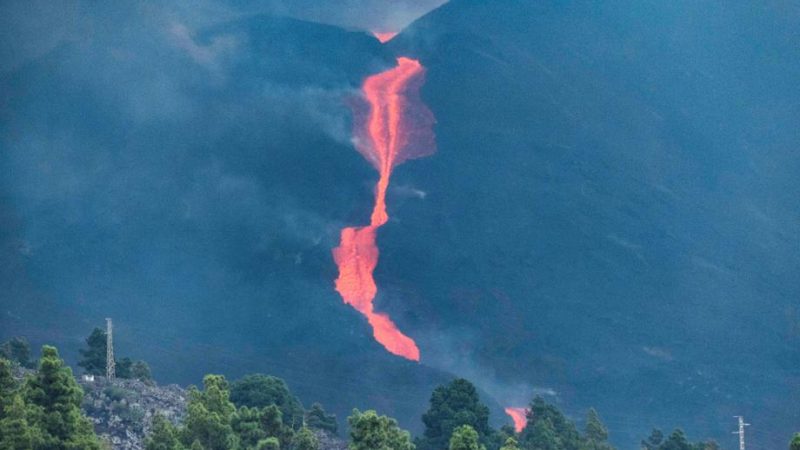 The volcanic eruption on the Spanish island of La Palma. [EPA-EFE / MIGUEL CALERO]

New lava flows that emerged during a volcanic eruption in Spain’s Canary Islands, which has destroyed some ​​525.77 hectares in three weeks, are keeping emergency services on standby.

Spain’s socialist Prime Minister, Pedro Sánchez, announced on Monday that he would be travelling to La Palma on Wednesday. He is expected to announce new urgent economic measures to help residents, EFE reported.

The new lava streams that emerged over the weekend after a partial collapse of the northern flank of the cone have increased magma output, but the direction of the engorged flows remains stable.

Seismic activity continues to be high, with tremors recorded at intermediate depths. More earthquakes are expected to follow with a risk of landslides in hilly areas.

According to the latest report from the Department of National Security, three weeks after the Cumbre Vieja volcano started its eruption, the crater continues to spew ash, sulphur, and lava.

Increased red-hot lava flows on the northern side of the volcano are descending towards the Todoque area, which to date had not been affected by the main flow.

The northern river of lava has two tranches, the southern one, which has flowed into the original stream of magma, and a new and northern one located the Los Llanos de Aridane industrial estate.

The new lava stream is being monitored closely as its route could shift.

Residents in the area face further uncertainty amid the constant rumble of the volcano and its sporadic explosions.

According to the European Copernicus service, 1,281 buildings have been affected, and 132 hectares of farmland have been damaged.

The lava delta the river of magma creates as it meets the Atlantic Ocean grows by the day and spans 34 hectares.