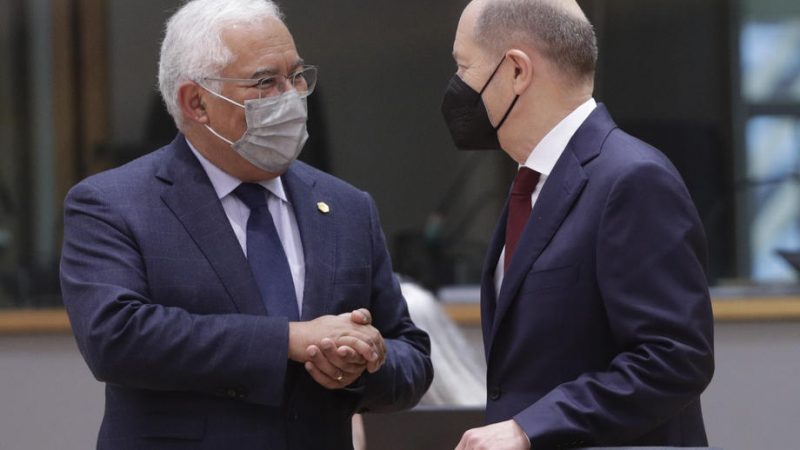 In Brussels for his first European Council, the newly appointed chancellor and member of the Social Democrats (SPD) took part in a public panel debate at a ‘mini-summit’ of the European Socialist Party (PSE), together with PS secretary-general PM Costa, and other socialist heads of state and government.

Challenged by the moderator to leave a message of support for Costa, the next of the Socialist leaders present to go to the polls on 30 January – Sholz said the Portuguese premier “is doing a very, very good job, and has a lot of support from the Portuguese people”.

“We see that when we are there, and I really enjoy being in Portugal discussing with António the political strategy of the country. I am absolutely confident that he will again be successful in this election campaign,” he said.

Scholz said that “the most important message, however, is that it is again time for social democratic policies in Europe and in the world”, and the essential thing is “to take care of aspects of people’s lives, it is above all a question of respect”, something which, he argued, Costa is doing.

“And so I am absolutely confident that you will be successful in your campaign,” he told Costa.

Spanish Prime Minister Pedro Sánchez also had words of support for Costa, confessing his “admiration” for his “great friend António”.

“I would say that António has the qualities of a leader. Firstly, he has a lot of empathy, which is crucial, especially for progressives. And secondly, he is always working for compromises, he is a great negotiator. So I think he is the leader that Portugal and Europe need,” Sánchez said.

At the end of the short panel debate, during which Costa focused on the importance of Europe’s social policies, PSE president Sergei Stanishev, who also said he was certain that the Portuguese socialist leader “will win elections again in January”, called for an ovation of support from everyone present in support of the Portuguese prime minister, “the first [socialist] to win elections next year”.