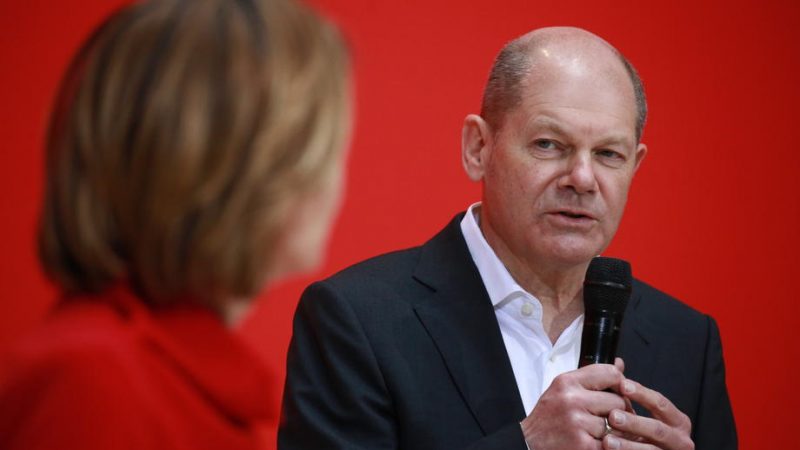 “It is possible to govern Germany without the CDU/CSU being involved in the government,” Scholz said. [EPA-EFE/Christian Marquardt]

SPD’s chancellor candidate Olaf Scholz and the party leadership emphasised on Monday that a so-called ‘traffic light’ coalition with the Greens and the Liberals could be an option to form a federal government without the conservative CDU/CSU after the federal elections in autumn.

“It is possible to govern Germany without the CDU/CSU being involved in the government,” Scholz said.

“The election result, especially, of course, the one in Rhineland-Palatinate, gives the Social Democratic Party wings overall,” he added.

The SPD has long argued that a shift would be possible once voters realised that Chancellor Angela Merkel was no longer up for election.

SPD General-Secretary Lars Klingbeil and deputy partly leader Kevin Kühnert brought the idea of a traffic light federal government into the conversation but current polls show no majority for this so far.

With his comments on coalition options at such an early stage ahead of the elections in September, Scholz wants to present himself as the most experienced politician among the possible candidates for the chancellorship.

In the state elections in Rhineland-Palatinate, a traffic light coalition under Dreyer is the preferred option. In Baden-Württemberg, a traffic light under the leadership of the Greens is mathematically an option, but Prime Minister Winfried Kretschmann (Greens) has left open whether he might want to hold on to the previous coalition partner CDU.

In current polls, the Social Democrats are currently in third place, with rankings at between 15-17%, behind the Greens, who are on 17-20%, which for the first time opens up the prospect of their claiming the Chancellorship.