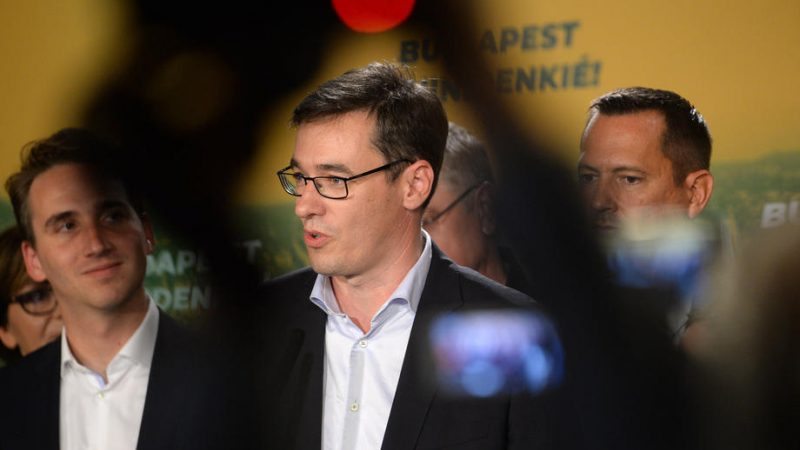 At his joint press conference with Péter Márki-Zay on Friday, Budapest’s green mayor Gergely Karácsony announced that he was withdrawing from the race. [EPA-EFE / Zoltan Balogh]

The second round of the opposition primaries began on Sunday (10 October)  and will run until next Saturday. European social-democrat and federalist MEP Klára Dobrev will face off Christian conservative independent mayor Péter Márki-Zay to lead the opposition against Viktor Orbán in the 2022 parliamentary polls.

At his joint press conference with Péter Márki-Zay on Friday, Budapest’s green mayor Gergely Karácsony announced he was withdrawing from the race. Karácsony said he is shutting down his campaign with an easy heart, as he fully trusts nonpartisan candidate Péter Márki-Zay, asking his supporters to vote for him in the second round of the primaries.

Karácsony’s decision came after a week-long tussle with Márki-Zay. At the first round of the primaries, Karácsony finished before Márki-Zay, but Dobrev beat both candidates. The negotiation process between the Karácsony and Márki-Zay had been rocky.

When the first round’s results came in, Karácsony told Telex that the only way he would withdraw from the election was if a tram ran over him. At the same time, Márki-Zay also held out, with commentators describing the situation as a game of chicken. Both candidates believed that it would be impossible for the opposition to win the elections next year, with Dobrev running for the top job.

In his speech at the press conference, Karácsony said: „Yesterday, sometime around 11, I arrived at the conclusion that if I did not take this step, Viktor Orbán would stay in power.”

Karácsony, the mayor of Budapest and prime ministerial candidate of Dialogue for Hungary (Párbeszéd Magyarországért, P), said that he and Márki-Zay agreed that once elected as PM, the otherwise right-leaning candidate would support the left-centrist platform as well, aiding its realisation, adding: „I believe Péter Márki-Zay can unite the opposition.”