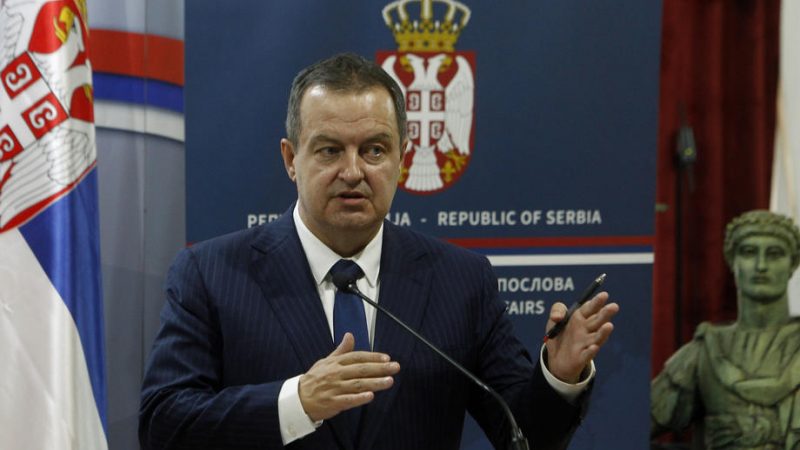 Serbia wanted the transition to go on smoothly, and to continue building firm ties with Washington, Dačić added. [EPA-EFE/DJORDJE SAVIC]

Serbia condemns the violence on the US Capitol in Washington, saying it favoured a peaceful transition of power to the newly-elected US President Joe Biden, Serbian speaker Ivica Dačić told Pink TV in an interview on Friday.

Serbia wanted the transition to go on smoothly, and to continue building firm ties with Washington, Dačić added.

“We respect the will of the (American) people, and it is very important that some principles be respected. We are witnessing double standards motivating certain people, especially the political parties hiding behind an election boycott, who are condemning the violence in Washington while being the organisers of violence in Belgrade,” said Dačic.

Dačić, leader of the Socialist Party of Serbia, the junior partner in the ruling coalition, said that Serbia condemned any violent attempt at taking a state institution by force, adding that no one could support violence, but that the same principle should be accepted by all states.

“We have yet to see the consequences (of the Capitol Hill insurgence). The Republicans have distanced themselves from Trump. More than 70 million people voted for him, and, knowing Trump, he will not leave peacefully. I don’t mean violence during the transition of power, but his political activities in the future. Maybe a new party in the US will emerge,” Dačić added.

Dačić is the only high-ranking Serbian official who has so far publicly commented on the violence that erupted on Capitol Hill in Washington. (EURACTIV.rs | betabriefing.com)